Recently, another post by Smriti Irani on Instagram, in which she could be seen taking up the viral ‘guess the gibberish‘ challenge left people saying me too!

Union minister Smriti Irani is one of the most relatable ministers of today’s age. From posting hilarious memes on early risers to listening to funky Bollywood songs, Irani’s Instagram posts give testimony to her connection with the Millenials. Recently, another post by her, in which she could be seen taking up the viral ‘Guess the gibberish‘ challenge left people saying me too!

Instagram's 'Guess the gibberish' challenge has been quite popular in recent times and recently, the 44-year-old lawmaker tried her hand at it. Taking to stories, she posted two videos wherein she could be seen acing the challenge. In the first, she successfully cracked 'all huck each arm' as 'lucky charm'. Irani also guessed the second one 'huge act mend' correctly as ' Hugh Jackman' but surprisingly, the answer turned out to be 'Ryan Reynolds'. The answer for the second one left the minister stunned and her frowned expression said it all. 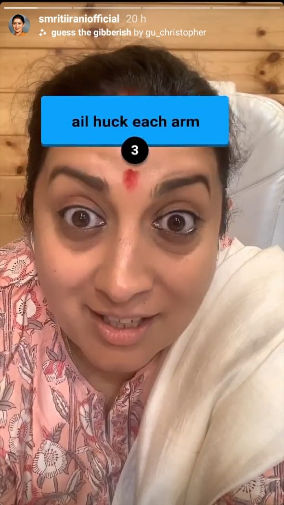 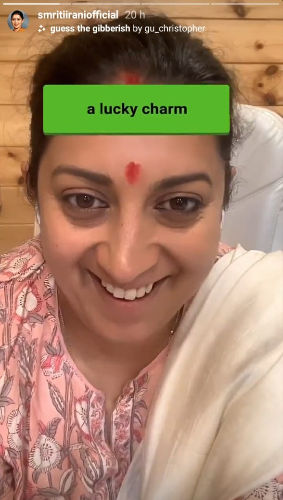 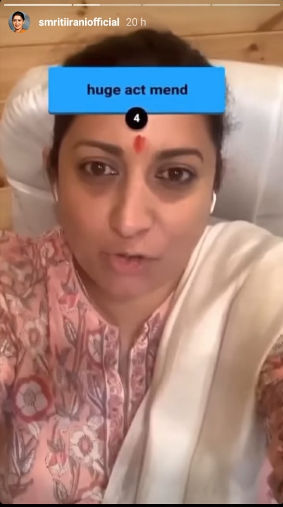 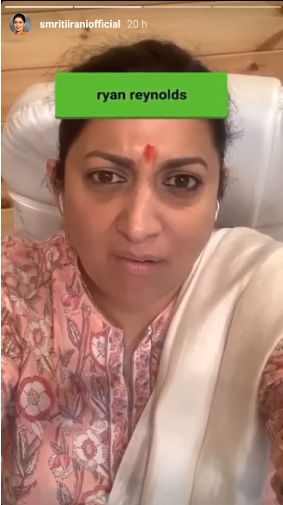 Recently, Bollywood actresses Sonam Kapoor and Anushka Sharma also tried the challenge. In this challenge, there will be an incorrect sentence that is displayed on the screen and one must guess what is the correct sentence within the given time i.e. nine seconds. Sonam Kapoor treated fans with a glimpse of it as she shared on her Instagram stories. The actor nearly got every answer right. In the video, Sonam Kapoor also seems to be enjoying the Gibberish challenge.

Meanwhile, Anushka Sharma's filter said, "Stir Range Earth Inks". The actress in the video is seen repeating the phrase twice and finally gets it to "Strange Things" whereas the right answer was: "Stranger Things". Calling herself, "Bewakoof Ladki", Anushka Sharma's final expression was too cute and adorable. It looks like she was seeing someone (probably Virat Kohli) sitting in front of her after goofing that answer up!

Read: Anushka Sharma Tries 'Guess The Gibberish' On Instagram; Did She Pass Or Fail? Watch