Home Minister Amit Shah has responded to BJP's Nitesh Rane who had earlier written a letter demanding security for Rohan Rai, the fiance of Disha Salian

Union Home Minister Amit Shah has responded to BJP MLA Nitesh Rane who had earlier written a letter to the former demanding security for Rohan Rai, the fiance of deceased celebrity manager Disha Salian, for his questioning by CBI in Mumbai. Amit Shah acknowledging Rane's letter has said that "action will be taken after inquiry and in accordance with the findings of the case."

"I received your letter dated September 16, 2020, in which you have requested security to be given to Mr Rohan Rai. Action will be taken after inquiry & in accordance with the findings of the case," Amit Shah responded.

Here is the copy of the letter: 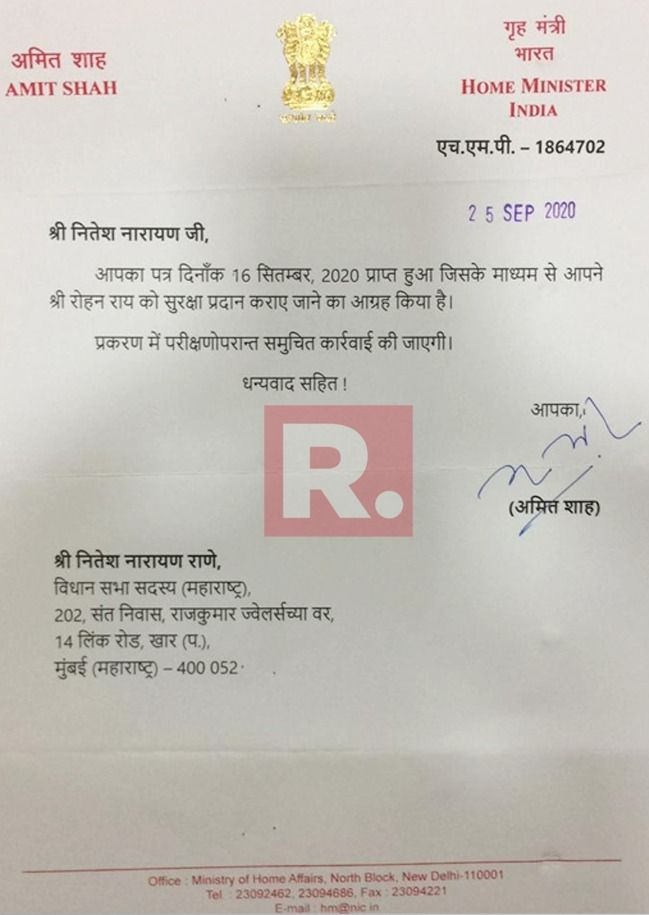 "I am writing to draw your attention to the ongoing investigation in the death of Sushant Singh Rajput and his former manager Disha Salian, both of who have died in mysterious circumstances. It is surprising that Rohan Rai, a young budding actor who was Disha's live-in partner has not ever been questioned by the Mumbai police on what could have led to Disha's death on June 8, 2020, when she was found lying on the ground on her building compound in Malad-Malvani in Mumbai," Rane wrote in his letter to Shah.

"I request you to kindly provide him with security so that he is safe when he returns to Mumbai. His statement to the CBI will be crucial to the ongoing investigation and a key link to unravelling both deaths - of Disha and Sushant - since it is my strong belief that both these deaths are linked," he added.

Rane further pointed out that Rohan was present in the house when Disha Salian allegedly fell from the high rise building but despite that, it is said that he went down to the spot only 20 or 25 minutes later, which points to suspicious behaviour. "Rohan has subsequently fled from Mumbai or may have been asked to leave Mumbai to avoid any scrutiny. I assume he is scared to return to Mumbai where the case is being investigated. This may be due to some pressure from influential people on him," Rane said.

Disha Salian had fallen to her death from the 14th floor flat of a building in Mumbai’s Malad on the intervening night of June 8 and 9. The Mumbai Police had called it a 'suicide', though evidence and accounts have contested that claim, including Republic's own investigations, and also Nitesh Rane who has contended that Rohan Rai - the fiance of Disha Salian - knows the full real details of what happened on the night she died but has been missing since then. Rane has claimed that Rohan Rai is the person who can lift the lid on the entire series of events in the Disha Salian and Sushant Singh Rajput cases.