In its order dated October 12, the Allahabad High Court prima facie held that the late-night cremation of the Hathras gangrape victim without her family's consent is an infringement of human rights. A division bench of Justices Pankaj Mithal and Rajan Roy maintained that cremation is an important ritual that cannot be compromised by taking shelter of the law and order situation. In a reference to the Uttar Pradesh government's handling of the situation, it observed, "The guiding principle of governance and administration, after independence, should be to ‘serve’ and ‘protect’ people and not to 'rule' and 'control' as was the case prior to independence".

Consequently, the bench directed Additional Chief Secretary (Home) Awanish Awasthi to submit a draft policy on avoiding such incidents in the future. During the hearing, the HC also raised questions on whether the District Magistrate should be allowed to continue at Hathras given that he might be the subject matter of the SIT inquiry. It urged the UP government to take a decision in this regard at the earliest keeping in mind the "fairness of the entire process". This assumes significance as the victim's family had demanded the removal of the Hathras DM.

Moreover, the bench asked the UP government to ensure the safety of the victim's kin and ruled against making public details of the inquiry by the SIT and CBI. The order has also prohibited all the officials directly connected with the case to make any statement in public regarding the commission of the offence to avoid confusion among the masses. Additionally, both the media and political parties have been warned against indulging in the "character assassination" of the victim and pronouncing the accused as guilty before trial. The matter will now come up for hearing on November 2.

Here are some excerpts from the Allahabad HC order: 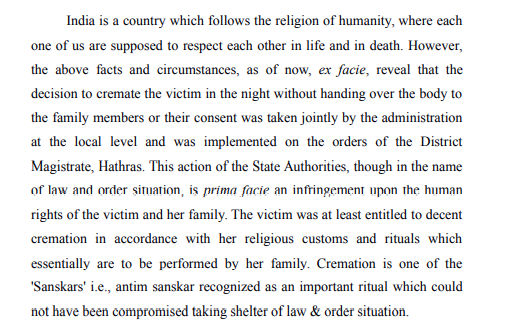 What is the Hathras case?

A 19-year-old woman in a village in UP's Hathras district was reported to have been brutally gangraped by 4 men when she was collecting fodder for her cattle on September 14. The victim, who was initially admitted to a local hospital in Hathras was shifted for further treatment to Delhi's Safdarjung Hospital. She succumbed to her injuries on Tuesday, September 29. Four persons have been arrested by the police in this case.

Initially, the UP government constituted a three-member SIT to probe the case. On the basis of the first report submitted by the SIT, Hathras Superintendent of Police Vikrant Vir, Commanding Officer Ram Shabd, Inspector Dinesh Kumar Verma, Sub Inspector Jagveer Singh and Head Constable Mahesh Pal were suspended. On the other hand, the CBI commenced its investigation after formally registering an FIR into the Hathras gangrape incident on October 11.