AIMIM chief Asaduddin Owaisi on Monday reacted to the acts of violence at Jawaharlal Nehru University (JNU) in which many students and teachers were injured.

AIMIM chief Asaduddin Owaisi on Monday reacted to the act of violence at Jawaharlal Nehru University (JNU) in which many students and teachers were injured. Taking to Twitter, the Hyderabad MP wrote, "In solidarity with the brave students of JNU". In a veiled attack, Owaisi accused the Central government of "punishing" the JNU students because "they dared to stand up". Referring to External Affairs Minister S Jaishankar and Finance Minister Nirmala Sitharaman who condemned the acts of violence in the JNU, Owaisi said that the situation is "so bad" that even Union Ministers are tweeting "helplessly." 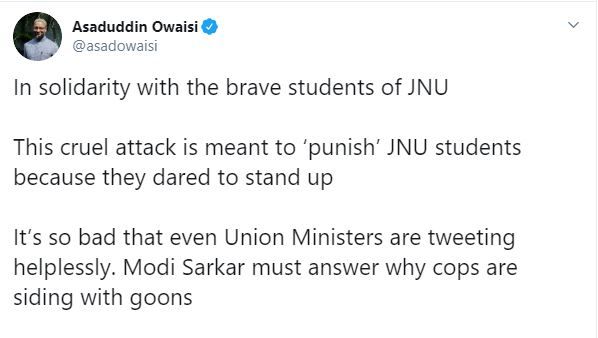 Mayawati calls for a judicial inquiry

Bahujan Samaj Party (BSP) chief Mayawati also condemned the act of violence against students and teachers and said that judicial inquiry of the incident can be done to ascertain facts about the incident. Taking to micro-blogging site Twitter, Mayawati said, "Violence with students and teachers in JNU is highly condemnable and shameful. The central government should take this incident very seriously. Also, it will be better if there is a judicial inquiry into this incident."

Political leaders, cutting across political lines, have condemned the attack on students and urged the police to take action against the perpetrators. EAM S Jaishankar also condemned the violence.

Have seen pictures of what is happening in #JNU. Condemn the violence unequivocally. This is completely against the tradition and culture of the university.

'We will soon register an FIR'

Hours after the violence, thousands of students in various cities showed solidarity with the students and teachers through nightlong protests and vigils. Union Minister Amit Shah spoke to the Delhi police chief and has sought a report. Meanwhile, the Delhi Police has received multiple complaints in regard to Sunday's incident and officials would be registering the FIR soon.

"We have received multiple complaints in connection with yesterday's violence at Jawaharlal Nehru University (JNU). We will soon register an FIR (First Information Report)," Delhi Police said in a statement. Around 28 students, including JNUSU president Aishe Ghosh, were injured and taken to the AIIMS Trauma Centre after a masked mob entered the JNU and attacked them and professors with sticks and rods.

Union Home Minister has spoken to Delhi Police Commissioner over JNU violence and instructed him to take necessary action. Hon’ble minister has also ordered an enquiry to be carried out by a Joint CP level officer and asked for a report to be submitted as soon as possible.