Amid the death toll in the Delhi violence crossing 40, Sonia Gandhi on Friday has deputed a 5-member delegation to visit riot-affected areas in northeast Delhi

Amid the death toll in the Delhi violence crossing 40, Congress interim chief Sonia Gandhi on Friday has deputed a 5-member delegation to visit riot-affected areas in northeast Delhi to assess the situation, according to Congress press release. The delegation comprising of senior Congress leaders - Mukul Wasnik, Shathisinh Gohil, Kumari Selja, Tariq Anwar and Sushmita Dev will submit a report after its visit. The party has incessantly demanded Home Minister Amit Shah's resignation due to police inaction in the riots. 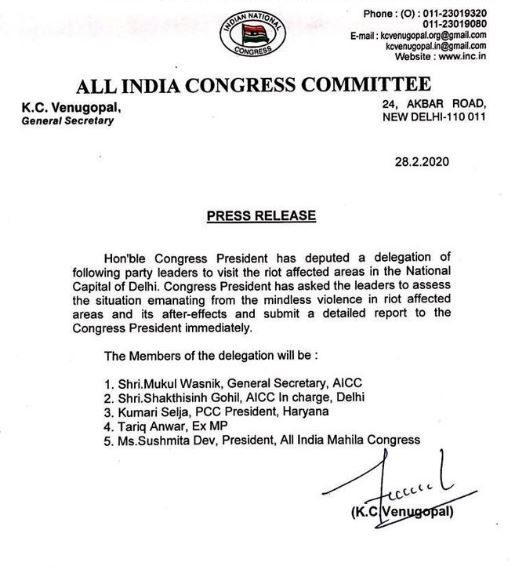 On Thursday, a Congress party delegation headed by former Prime Minister Manmohan Singh and interim Congress President Sonia Gandhi met President Ram Nath Kovind at the Rashtrapati Bhavan. The delegation submitted a memorandum to the President demanding Shah's resignation, adding the riots was a  reflection on the total failure of the Central Government. The Congress has also slammed BJP leader Kapil Mishra for his incendiary speech hours prior to the stone-pelting started on Sunday, demanding his arrest.

Clashes began between pro-CAA and anti-CAA groups as both camps resorted to stone-pelting on Sunday after Shaheen Bagh-like protests started in Jaffrabad and Chand Bagh. The situation deteriorated even as Delhi Police was present at the spot as houses, shops, and buses were burnt. While the Home Minister reviewed the situation on Monday and Tuesday, the violence increased killing 43 and injuring over 189. Subsequently, the Delhi borders were sealed and NSA Ajit Doval visited the DCP North East in Seelampur to review the security situation. The Home Ministry deputed SN Shrivastava as the Special Commissioner of Delhi Police (Law and Order) and Delhi CM has offered monetary, medical and home relief to the injured and deceased.

Meanwhile, on Thursday, Congress delegation met President Kovind slammed the transfer of Delhi HC Justice S Muralidhar to Punjab amid the Delhi violence hearing. The police have filed 48 FIRs, 100 cases and have arrested or detained  514 people to date. AAP has suspended its Councillor, Tahir Hussain, after being named in the IB officer Ankit Sharma's murder.