In a letter written to Lt. Governor of J&K Girish Chandra Murmu, 8 former ministers, legislators, and legislative council members have made 13 demands.

In a letter written to Lt. Governor of Jammu and Kashmir Girish Chandra Murmu on Tuesday, 8 former ministers, legislators, and legislative council members have made 13 demands towards the socio-economic and political aspirations of people of J&K. The political representatives admit that the valley remained peaceful and no fatalities were recorded after the abrogation of Article 370 and Article 35A.

“We are of firm belief that the economic development can only happen if there is normalcy and stability in the region,” read the letter that was addressed to the Lt. Governor. The letter, accessed by Republic TV, has been written and signed by Altaf Bukhari, former minister; Ghulam Hassan Mir, President, Democratic Party Nationalist; Mohammad Dilawar Mir, former minister; Zaffar Iqbal, former MLC; Javed Hassan Beig, former MLA; Noor Mohammad Sheikh, former MLA; Choudhary Qamar Hussain, former MLA; Raja Manzoor Ahmad, former MLA. Here are some of the demands made by the political representatives:

The political representatives termed statehood as the “solidification of the idea of pluralism and respectful coexistence”. They added, “We demand restoration of statehood including the establishment of a legislative council and in providing thereto reservation of seats for socially and economically backward classes, art, culture, languages, literature and sports.”

Safeguarding rights over land and jobs

According to them, the annulment of Article 35A is the main reason behind the present discontentment among the people of Jammu and Kashmir. It is like “stripping them off the rights over their land and other rightful holdings.” The political representatives demanded, “tangible legal and constitutional safeguards that can be put in place by virtue of which protection of domicile rights including tat of reservation for the permanent residents of Jammu and Kashmir in the matter of employment and that of admissions to professional courses is ensured.”

The political representatives called for a “compassionate policy regarding those detainees who are citizens of J&K and in jails under PSA”. According to them, this would be a great “confidence-building measure if the cases of these PSA detainees are reviewed.” The also called for an early release of the detainees.

Among the other major demands included in the memorandum are withdrawing cases against youth, restoration of J&K Bank’s functional dominion, reviving agriculture and horticulture sectors, support for industry and manufacturing sector, Tourism and allied industries and their revival, restoration of the Internet, relief for general trade. Sources within the government say that they are working on a blueprint. Meetings with stakeholders have taken place to ensure that maximum benefit reaches out to the people of Jammu & Kashmir. 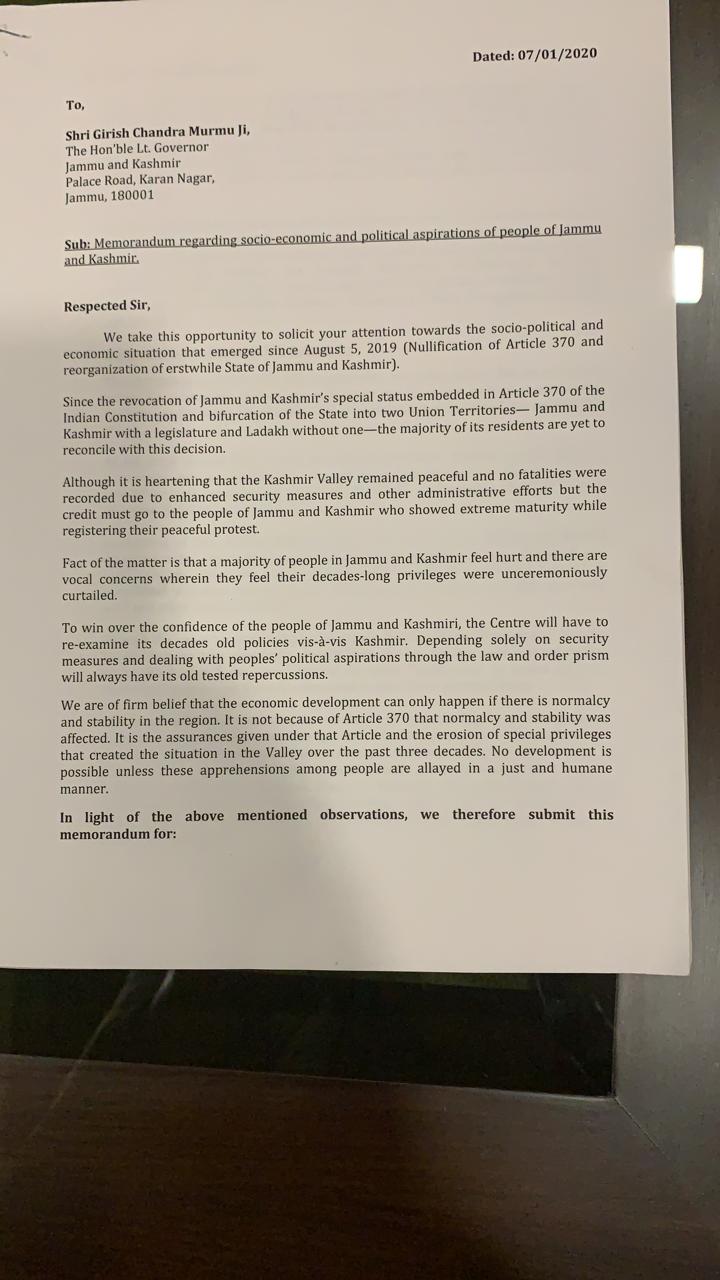 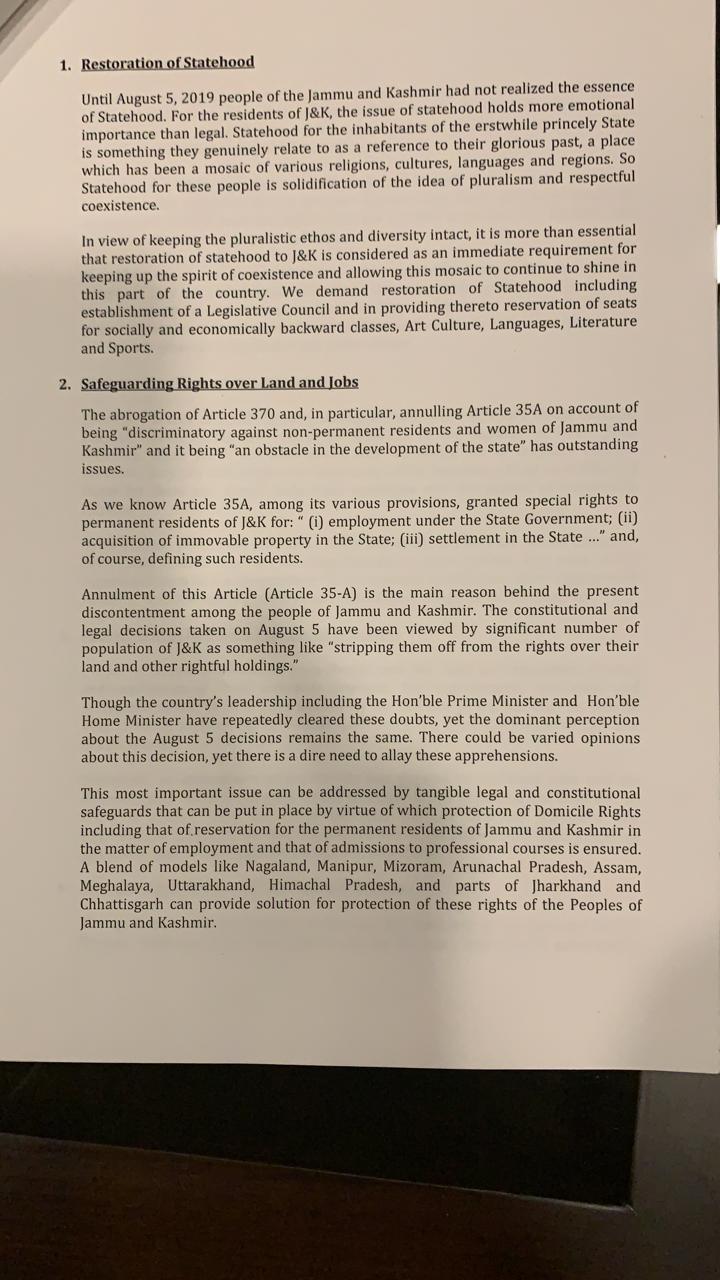 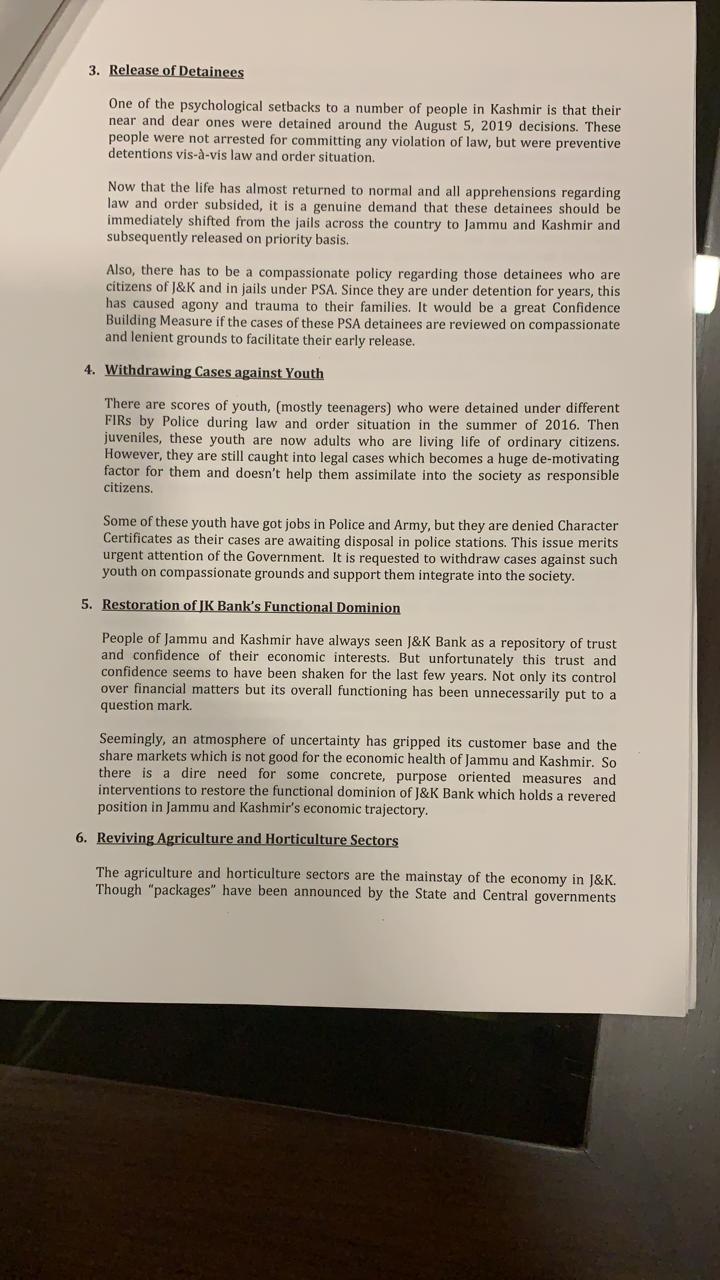 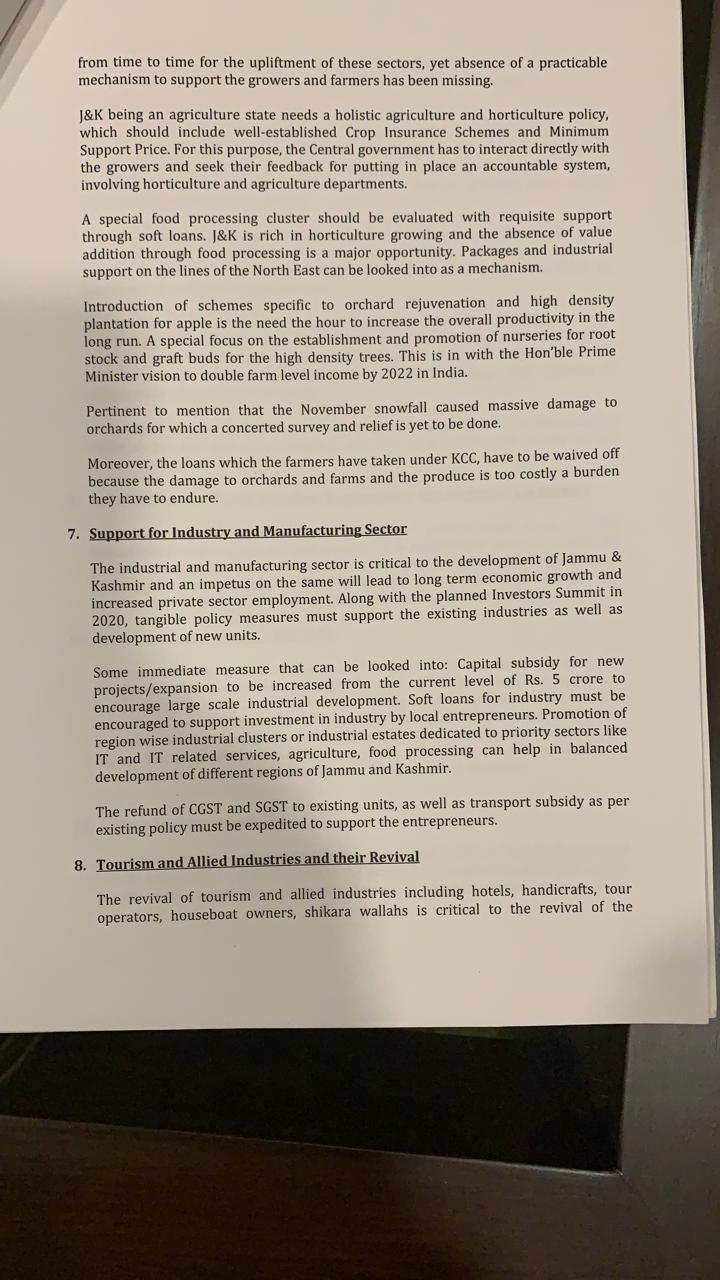 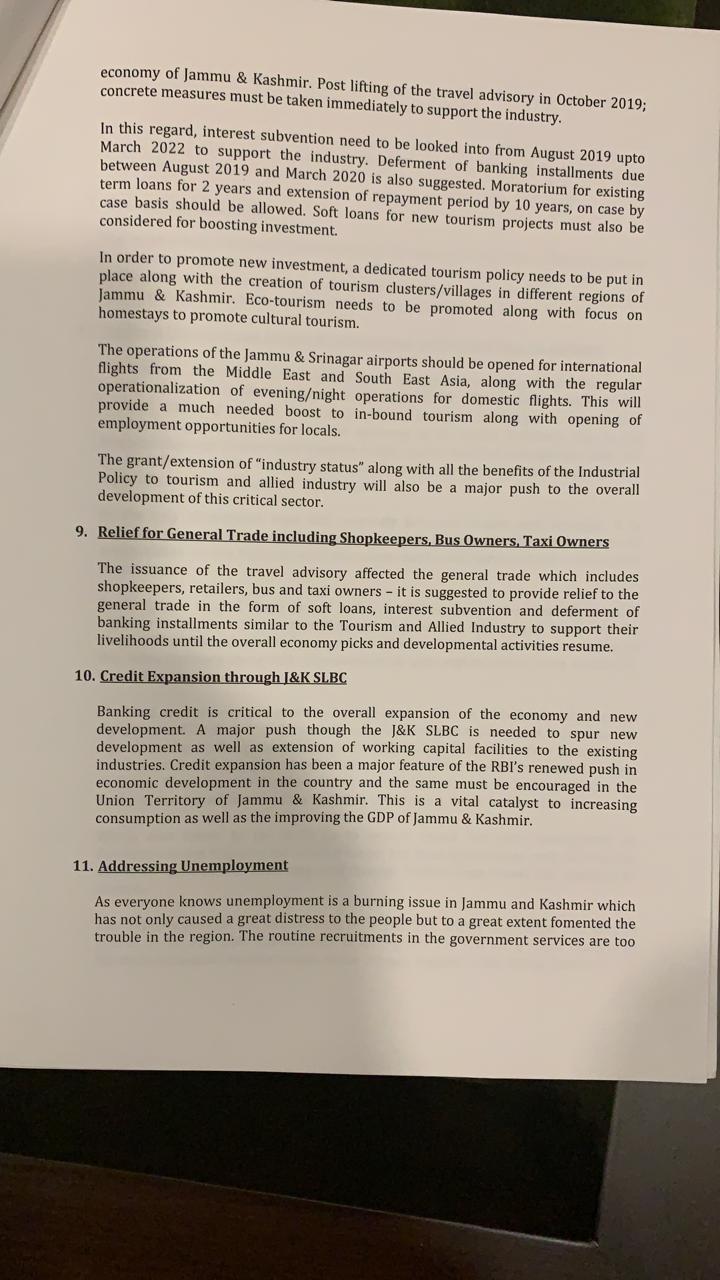 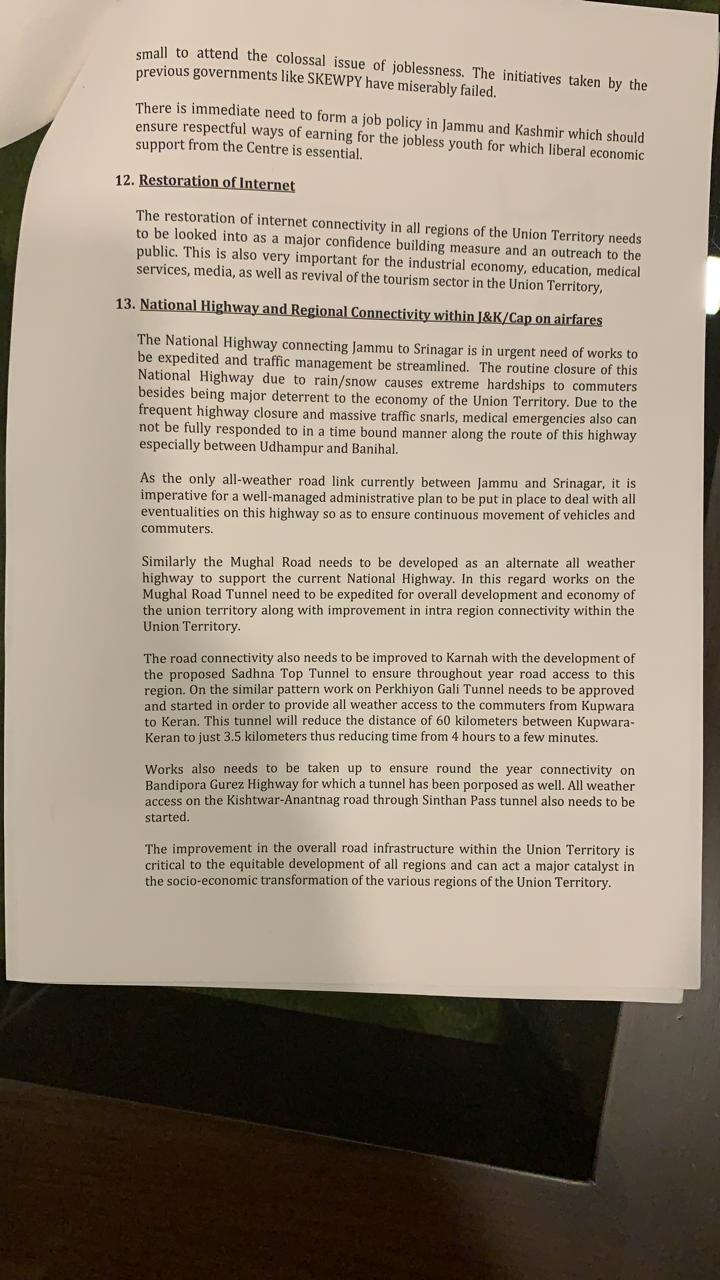 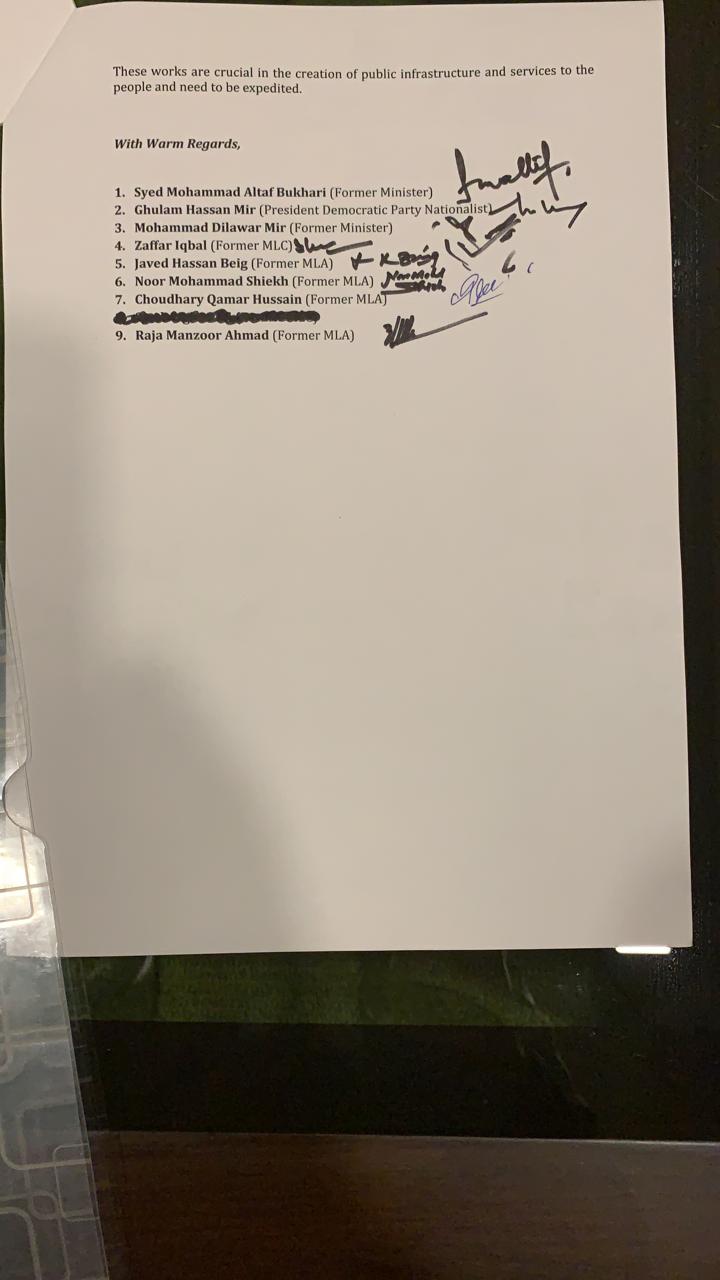 Read: 'Tried To Persuade Him To Surrender But He Refused': Kashmir I-G On Awantipora Encounter

PEOPLE HAVE PLEDGED SO FAR
LATEST NEWS
View all
21 hours ago
BJP indulging in horse trading in Guj: Gehlot
7 hours ago
Another Gujarat Congress MLA resigns ahead of RS polls
13 hours ago
Not right to do politics over COVID-19 situation: Harsh Vardhan on AAP's allegation on RML Hospital
13 hours ago
Andhra Pradesh: Naidu claims YSRCP 'looting' poor people on pretext of free house sites
20 hours ago
Goal of Shivaji's life was to create Hindu empire: RSS leader