Poster war between the two parties of Bihar continued as the JDU released another poster mocking RJD for allegedly registering a bus in the name of a BPL man.

The poster war between the two principal parties of Bihar continued as the Janata Dal (United) JDU released another poster mocking Rashtriya Janata Dal (RJD) leader Tejashwi Yadav for allegedly registering the bus for his Berozgari 'rath' yatra in the name of a Below Poverty Line (BPL) cardholder. JDU member and Bihar’s cabinet minister Neeraj Kumar slammed RJD for registering the bus in the name of a Mangal Pal. He said that RJD has fooled a person belonging to the economically backward class.

Seeking answers from the RJD leader Tejashwi Yadav, Neeraj Kumar said that “It has been 48 hours, but we have got no response from RJD”. He further said that the expression of anguish in the poster should be appreciated. “A person who is below the poverty line, who has a ration card, such has been fooled. An economical fraud has been committed in his name,” Neeraj Kumar added.

Furthermore, Neeraj Kumar asked a question of the RJD, asking them the source of the money which was used to procure the bus and subsequently registering it in the name of BPL cardholder Mangal Pal.

The poster shows RJD chief Lalu Prasad Yadav and Tejashwi Yadav’s graphic carrying RJD’s symbol - ‘lantern’ in their hand. They are standing on a bus and a message has been displayed on the right side of the poster that says, “Social justice imposter commits economic fraud with a backward class citizen.” 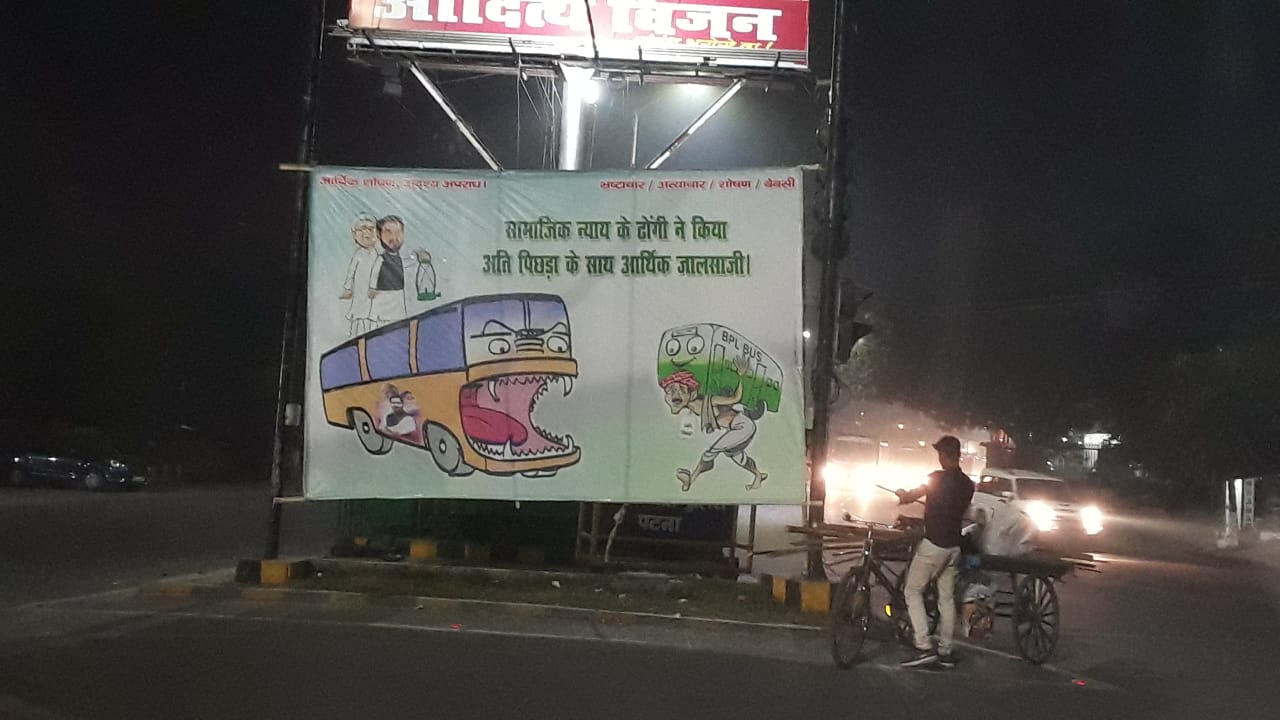 Mangal Pal, the man under whom the bus (Yuva Kranti Rath) is registered: I do not belong to the Below Poverty Line (BPL) category. I am a contractor. The person under whom I am working has bought the bus under my name. All allegations are false. https://t.co/FxC4TevOPO pic.twitter.com/o0Mvu7iIbo

The Rashtriya Janata Dal (RJD) has already started preparations for this year's assembly elections in Bihar. The party has made unemployment a big issue, with the ‘Berozgari Hatao’ (Remove unemployment) Yatra set to begin from 23 February to corner the Bihar government on the issue of unemployment. The Yatra will start at Bihar Veterinary College Ground in Patna following which it will be held in every district of the state. However, the ownership of the bus has thrown it into controversy, with Tejashwi earlier refuting document-based claims on its ownership by saying that even Sunny Leone had topped a Bihar exam 'on paper'.