Rallying all the Opposition parties against Citizenship Act (CAA), TMC chief Mamata Banerjee on Monday, has written to Sharad Pawar regarding a joint protests

Rallying all the Opposition parties against the Citizenship Act (CAA), Trinamool chief Mamata Banerjee on Monday, has written to NCP Supremo Sharad Pawar regarding a joint protest against CAA comprising of all parties. She has highlighted the seriousness of the issue stating that the ruling party is 'bulldozing democracy using state machinery'. Claiming that the entire world was watching India on this issue, she requested to meet Pawar to chalk out a plan to 'save democracy'.

Mamata writes to Pawar on CAA 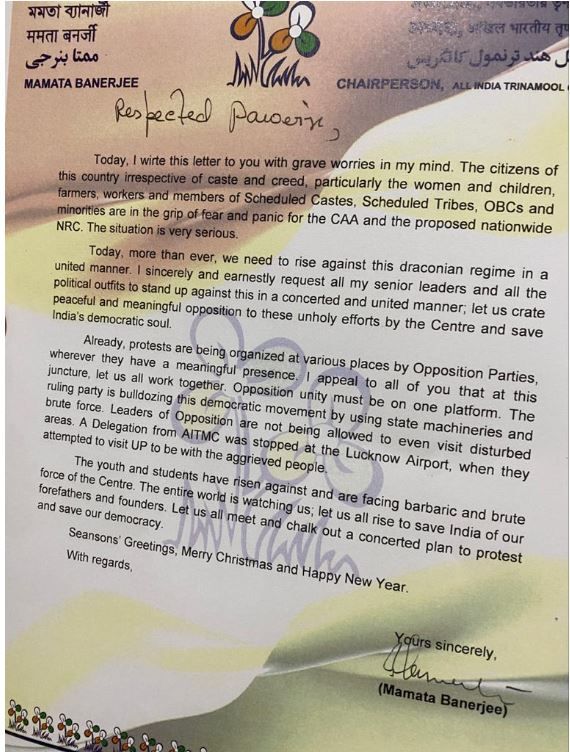 Earlier on Thursday, pushing for UN interference into India's Citizenship Act, the West Bengal CM asked for a referendum by the people conducted by the United Nations, while speaking at a Kolkata anti-CAA rally. She has dared the Centre to let the people vote on the Act to judge if they really accept the act. Violent protests against the act have been witnessed across the nation.

"If BJP has guts, let an impartial oragnization like the United Nations or Human Rights Commission do a referendum on CAA and ask people if they accept it or not. No BJP, NO TMC involved. Let's see what people say," she said. Banerjee had organised three-day protests since Monday to oppose CAA - 'No CAB No NRC'.

Pune police issues notice to 163, prohibiting from Bhima-Koregaon ahead of anniversary

Furthermore, the Trinamool government stayed the preparation/updation of the National population register (NPR) process in the state. The government has issued a directive to the Census cell stating that no census activities will be taken up without clearance from the West Bengal government. The NPR documents all the usual residents of the country and is prepared at the local, sub-District, District, State and National level under provisions of the Citizenship Act 1955. Kerala too has done the same.

Sporadic incidents of violence reported from have been reported from Nadia, North 24 Parganas & Howrah districts. In retaliation to cut down misinformation being spread around the state, internet services were suspended in Malda, Uttar Dinajpur, Murshidabad, Howrah, North 24 Parganas and parts of South 24 Parganas, as a precautionary measure by state officials. On Saturday, protesters had set ablaze three railway stations, several trains, and at least 25 buses. Train services too were suspended from Kolkata to North Bengal and North East. Police have arrested 354 miscreants across the state.