As voting for the Delhi Assembly Elections is currently underway, Congress leader Randeep Singh Surjewala has hit out at the Election Commission of India.

As voting for the Delhi Assembly Elections is currently underway, Congress leader Randeep Singh Surjewala has hit out at the Election Commission of India and has accused the BJP-led Central government of destructing the institution. Taking to Twitter on Saturday, Surjewala wrote, that ECI becomes a "paper tiger" when it comes to punishing BJP leader and it lets "Modi Govt program EVM's". He added that ECI becomes "subservient" while acting against Modi-Shah duo. 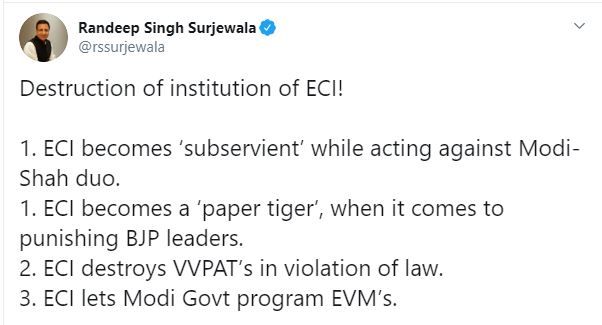 Surjewala's remarks come at a time when Congress leader Alka Lamba sparked controversy after she allegedly violated the Model Code of Conduct (MCC) by attempting to slap an AAP part worker after he allegedly misbehaved with her outside the polling booth. Delhi Police is reportedly mulling to take action against her, stated sources. The Delhi police said, "We will look into the matter. She has violated the Model Code of Conduct."

'Congress may spring a surprise'

The Congress may spring a surprise in Delhi as it did in the elections in neighbouring Haryana last year, senior party leader Surjewala had claimed on Thursday. "Some news channels were giving us just two seats in Haryana but we won 31. It is going to happen again," he told a press conference.

Terming the BJP, which is in power at the Centre, and the ruling AAP in Delhi as "Jhoothon ki Sarkar aur Jhoothon ke Sardar", Surjewala accused them of failing in areas of health, pollution mitigation, education, clean drinking water supply and public transport in the national capital.

READ | Randeep Surjewala: 'Govt is crushing the voice of the youth and the students'

Over 1.47 crore voters face the choice of re-electing the AAP or replacing it with the BJP or the Congress in the national capital.  The Congress, which ruled Delhi for 15 years before being decimated by the AAP, has led a relatively lacklustre campaign. The party's top leaders Rahul Gandhi and Priyanka Gandhi Vadra have barely campaigned for its candidates.

READ | PM Modi's Surya Namaskar will strengthen his back, not economy: Randeep Surjewala

In the 2015 assembly polls, the AAP had won 54.3% of the vote, while the BJP got 32% and the Congress managed just 9.6%. While the AAP won 67 seats in 2015, since then the party has conceded one seat to the BJP in a bypoll and six of its lawmakers have been disqualified over joining other parties. The results of the Delhi election will be out on Tuesday.