On Tuesday, President Ram Nath Kovind promulgated 'The Salaries, Allowances and Pension of Members of Parliament (Amendment) Ordinance, 2020'. This was approved by the Union Cabinet on April 6. According to the ordinance, it was necessary to raise resources for the fight against the novel coronavirus. For this purpose, a new sub-section has been inserted in Section 3 of 'The Salaries, Allowances and Pension of Members of Parliament Act, 1954' to reduce the salaries payable to Lok Sabha and Rajya Sabha MPs by 30%. This will be applicable for a period of one year from April 1, 2020. Currently, there are 4789 confirmed novel coronavirus cases in India out of which 353 people have recovered while 124 individuals have lost their lives.

Read the full Gazette notification of the ordinance here: 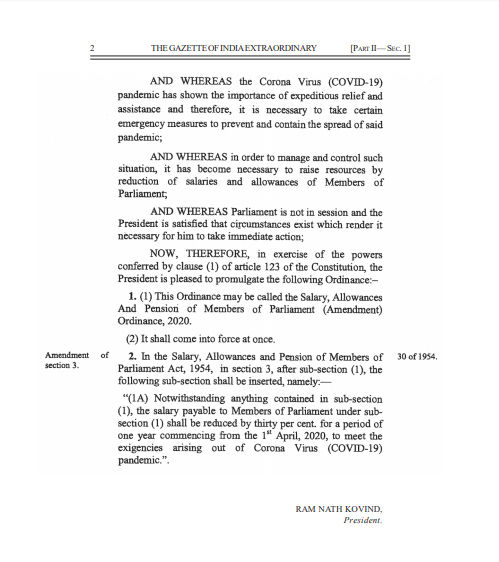 Addressing a press briefing after the Union Cabinet meeting on Monday, Information and Broadcasting Minister Prakash Javadekar talked about the decision to bring in an ordinance to amend 'The Salaries, Allowances and Pension of Members of Parliament Act, 1954'. Moreover, he revealed that President Ram Nath Kovind, Vice President M Venkaiah Naidu and all the Governors had voluntarily decided to take a 30% salary cut. Javadekar also announced the suspension of the MPLADS funds for two years.

He stated that Rs.7,900 crore saved from the MPLADS will go to the Consolidated Fund of India. Furthermore, he noted that many MPs had already pledged their MPLADS funds of Rs.5 crore per year to combat the novel coronavirus crisis. While politicians cutting across party lines welcomed the move to slash salaries, they did not take kindly to the suspension of the MPLADs funds.

Besides, the President, Vice President and all the Governors have also decided to take a 30 percent cut in their salaries for a year. #cabinetdecisions pic.twitter.com/96Y7RKQgqS

PEOPLE HAVE PLEDGED SO FAR
LATEST NEWS
View all
9 hours ago
Naidu comes down all guns blazing at Reddy as YSRCP completes a year in Andhra
1 hour ago
CPI-M writes to Himachal Governor, alleges corruption in purchase of medical items
2 hours ago
Smriti Irani thanks PM Modi for introducing EGoS and PDCs in Ministries
9 hours ago
No death in 'Shramik' trains caused by starvation, issue being politicised: BJP
9 hours ago
After RJD, Left parties to observe Vishwasghat-Dhikkar Diwas to protest BJP s virtual rally on June 7