UP Commission For Minorities On CAA: Don't Get Misguided By Anti-social Elements

Uttar Pradesh Commission for Minorities appealed to the protesters to not be misguided by anti-social elements and refrain from vandalising public property.

Amid the ongoing anti-CAA protests in some parts of the State, the Uttar Pradesh Commission for Minorities on Thursday appealed to the protestors to not be misguided by anti-social elements and refrain from vandalising public property. In an attempt to dispel rumours surrounding the contentious law, the commission also stated that the amended act will not take away anyone's citizenship. The Commission further emphasised that the new act is in favour of minorities, who are facing religious persecution in Islamic countries. 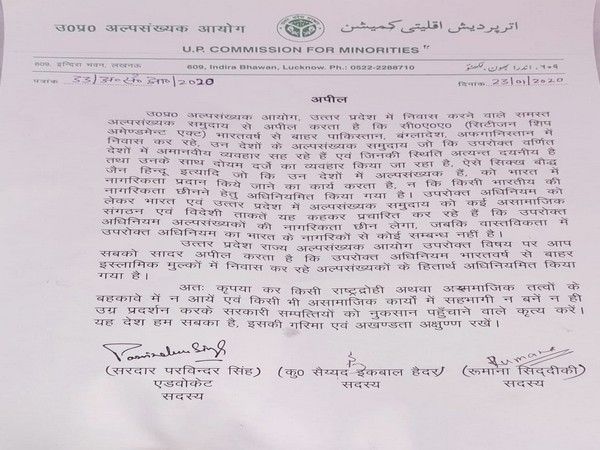 "We request you not to pay heed or to get misguided by any anti-social and anti-national elements. This country belongs to us and we should all secure its prestige and integrity. The CAA is not about taking away anyone's citizenship. Regarding the act, the unsocialised organisations and foreigner forces in India and Uttar Pradesh telling minorities that the aim of CAA is to take away citizenship, in reality, it has nothing to with it," said the Commission.

Earlier today, the National Commission for Minorities (NCM) officials on Wednesday said that the NCM has “successfully” held six seminars to dispel fears and misunderstandings among Muslims about the CAA, and is planning more such events across the country.

The first six seminars were held in Uttar Pradesh, where 21 persons had died during protests against the Act. NCM chairperson Syed Ghayorul Hasan Rizvi said the panel would soon hold seminars in Karnataka, Maharashtra, West Bengal, and Assam to clear all “confusion” regarding the new law.

“It is NCM’s job to dispel fears and doubts of minorities and many people have been misled on CAA. Through these seminars, we are telling Muslims that the CAA does not take away anyone’s citizenship and that Indians, whatever be their religion, will not be affected. We did face a lot of questions but in the end, people were convinced that the CAA does not threaten their citizenship. Around 200-300 Muslims, including intellectuals, imams, and prominent people from the community participated in the seminars.” Rizvi said.

While the ruling BJP has been running a door-to-door campaign in support of the CAA, explaining the rationale behind it, the NCM is the first government-linked body to endorse the CAA. The NCM is a statutory body for the protection of minority rights. The next round of seminars would be held in Karnataka at the end of this month.

Protests had erupted in different parts of the country against the CAA which grants citizenship to Hindus, Sikhs, Jains, Parsis, Buddhists and Christians fleeing religious persecution from Pakistan, Afghanistan, and Bangladesh and who came to India on or before December 31, 2014.