VK Sasikala Released From Prison After 4-years; To Continue Covid Treatment In Bengaluru

V K Sasikala was formally released from prison on Wednesday after jail officials completed the formalities. She will remain in the hospital for her treatment. 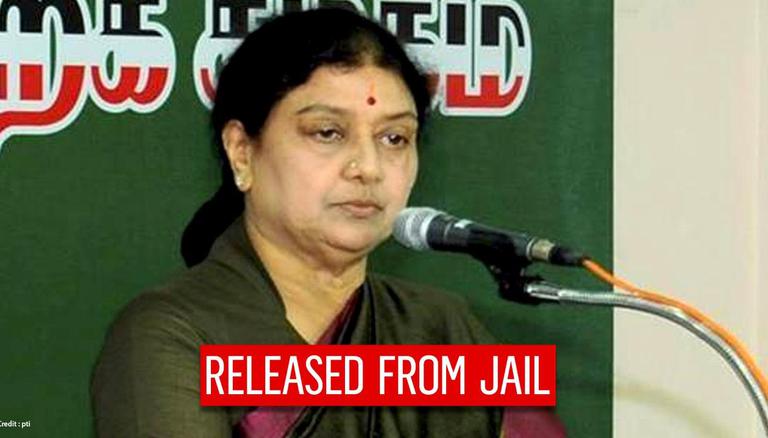 Former AIADMK leader V K Sasikala was formally released from prison on Wednesday after jail officials completed the formalities. The procedures for her release were done at the Victoria Hospital, where she is presently undergoing treatment for COVID-19 infection, which she had contracted a week ago.

Sasikala to remain in hospital

According to the hospital's Medical Superintendent, she will be kept in the hospital for four to five days and will not be shifted to a private hospital as of now. The close aide of former Tamil Nadu Chief Minister J Jayalalithaa was in the Central Jail in Parappana Agrahara in Bengaluru for four years since February 2017 in connection with the Rs 66 crore disproportionate assets case. A huge crowd of Sasikala supporters lined up outside the Victoria Hospital, raising slogans in her favour and distributed sweets in celebration, PTI reported.

Independent legislator T T V Dhinakaran, Sasikala's nephew and founder of Amma Makkal Munnetra Kazhagam (AMMK) had on Monday said a decision on the discharge of his aunt from the hospital would be taken after consulting the doctors.

Sasikala was sentenced to four years imprisonment in February 2017 in the Rs 66 crore disproportionate assets case along with her sister-in-law J Ilavarasi and Jayalalithaa's foster son V N Sudhakaran. On the other hand, Ilavarasi, who too had contracted Coronavirus is asymptomatic. She will be free in the first week of February.

Earlier this month, Tamil Nadu Chief Minister met Home Minister Amit Shah in Delhi and ruled out a return of Sasikala into AIADMK folds. He said that Sasikala was inducted into the party only after Jayalalitha (Amma)'s demise, adding that most of Sasikala's supporters were back in AIADMK folds.

"I can say that 100% there is no chance of Sasikala returning to AIADMK," he said, adding that most of Sasikala supporters were back in AIADMK and that only a few people were there in her camp now." Amma too had kept her away from the party. Only after Amma’s death, Sasikala entered the party. She was not in AIADMK when Amma was alive,” said EPS.

On being asked whether her release from the jail would hamper AIADMK's chances in the upcoming polls, the Tamil Nadu CM told the media that her release will have 'zero impact' on the party. Assembly elections in Tamil Nadu are due during April-May 2021.