Former MasterChef Australia judge Gary Mehigan took to his Instagram handle and shared that he misses India and therefore cooked Biryani at home. See it here

Gary Mehigan is one of the most popular chefs and restaurateurs in the world. Gary Mehigan’s recipes are popular all over the world for its delicious taste. He became a household name with his stint at MasterChef Australia as a judge. He is also a very popular name amongst the Indian audiences as he loves Indian cuisine and has travelled to India in the past too.

The former MasterChef Australia judge recently took to his official Instagram handle to show his love for India and Indian food. Here is a look at Gary Mehigan’s Instagram post.

The former MasterChef Australia judge took to his official Instagram handle and shared a series of pictures and videos. Through his Instagram post, Gary Mehigan shared that he misses India a lot and that is why he is preparing delicious Biryani for dinner.

The pictures and videos shared by him see a step by step preparation of Biryani where he is first marinating the meat, then he cooked the onions before preparing the gravy and finally, he added the rice to make a perfectly delicious Biryani. Here is a look at MasterChef Australia fame Gary Mehigan’s mouth-watering Biryani.

Along with the post, he also shared a long caption where he talked about his love for India and hos he is missing the country. Gary Mehigan said he was trying to be good and was avoiding excess consumption of rice but he could not control the urge of having another cup of aged Basmati rice through Biryani. He mentioned that he is missing India and also travelling and as a result, he decided to bring India ‘at home’.

As soon as he shared the post on his official Instagram handle, netizens flooded the comments section. A lot of people from India took to the comments section and suggested him to try several other varieties of Biryani. He is a popular name among the Indian audiences and Gary Mehigan’s India show Masters of Taste where he travelled through India had also earned him praises.

One netizen commented, "Next time plz do come to Tamil Nadu, India and try Chettinad chicken and biriyani.. love from India..â¤ï¸ðŸ˜˜” while another user requested for the recipe of his Biryani. A user also suggested him to try Kolkata Biryani while another suggested North Kerala Biryani. Here is a look at some of the comments on Gary Mehigan’s Instagram. 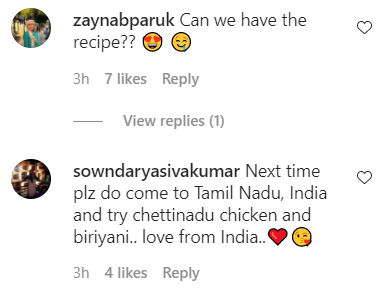