Masterchef Pankaj Bhadouria wanted to show fans a glimpse of how she goes on to shoot her videos. And this post will leave fans in shock. See pic.

Masterchef Pankaj Bhadouria is popularly known for her cooking skills. She also provides the viewers with some creative ways to cook the meal in the easiest way. Fans love the basic cooking tips she shares, as they cover all the essential and everyday food. But seems like Masterchef Pankaj Bhadouria wanted to show fans a glimpse of how she goes on to shoot her videos and fans were stumped looking at it.

Masterchef Pankaj Bhadouria shared photos of her taking a mango out from the refrigerator where one might be wondering that the camera was first installed in the refrigerator and then captured but no, that does not seem to be the case. Pankaj also shared a behind the scene glimpse of how they went on to capture the moment. In the BTS post, the trays of the refrigerator have been brought out and placed it on a table. It has been set perfectly making viewers think that she is taking out the mango from the fridge.

Along with the post, she also went on to write saying, "Behind the Scenes! I desperately wanted to take a picture of me getting mangoes out of the refrigerator. But when I kept the camera in the Refrigerator, none of the pictures coming out were good enough for me. And then we figured out, we need to get it all out of the refrigerator and here it is, here is how we finally did it..." Check out the post below.

A post shared by MasterChef Pankaj Bhadouria (@masterchefpankajbhadouria) on May 20, 2020 at 5:57am PDT

Fans and netizens were stumped seeing this post. They soon were left impressed and could not believe their eyes. They went on to write saying, “I was wondering the same...now I got it,” “Mastering the photography art as well,” “Awesome idea... ma’am...Thank you for sharing photography...” and many more. Check out a few more comments from fans below. 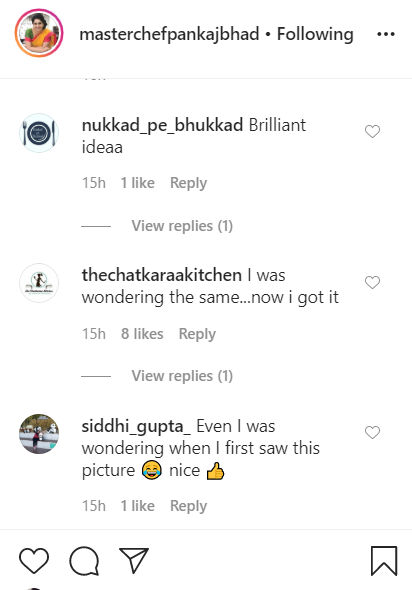 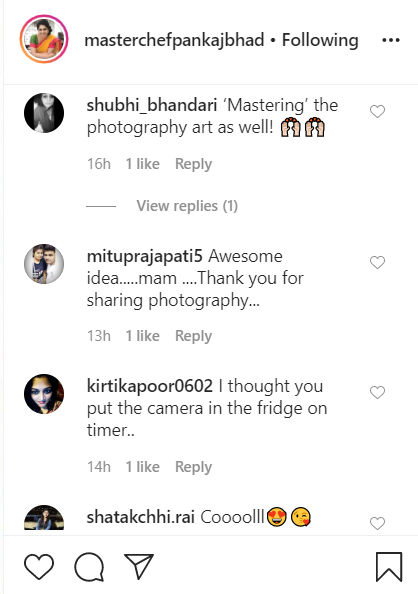 On the other hand, during the lockdown, Masterchef Pankaj Bhadouria has been sharing several recipe ideas that fans and viewers can try to make at home. Of late she has shared recipes like how to make Schezwan Sauce, Reheat Pizza, Peanut Butter and many more. Fans are also loving the recipes that she has been sharing during this time.