This Viral Video Of An Adorable Toddler Chef Is Winning Over The Internet. Watch Here

Instagram has several food influencers who dedicate their page to food and the culinary arts. However, one food account, named Kobe Eats, has managed to stand out from the rest. The head chef of this account is not a cooking master but is instead an adorable toddler, who tries to cook a different dish every day. This cute little kid chef has won over the internet and in just a few days, Kobe Eats' Instagram page has already earned over 340k followers.

Above is the latest video from the Kobe Eats Instagram page. Like every other video on this Instagram page, it features the toddler chef who tries to cook a new dish every day with the help of his mom. Kobe Eats has now become a viral phenomenon on social media, as people cannot stop gushing over his adorable antics.

Also Read | This Day That Year: HBO's hilarious response to the viral coffee cup in 'Game of Thrones'

The toddler chef danced around, messed up the counter, and was happy and cheerful throughout the video. Due to the positivity and cuteness of the video, this toddler chef has managed to win over the internet. Here are some netizens who revealed why they loved the viral toddler chef's videos. 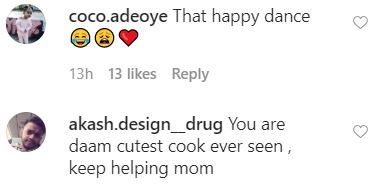 Kobe Eats' Instagram page already has 58 videos. The page has been sharing videos of the adorable chef since February of 2020. Here are some of the page's other recent videos.

PEOPLE HAVE PLEDGED SO FAR
LATEST NEWS
View all
6 days ago
Desi hack: how to cut a mango in three easy ways; read
4 days ago
Masterchef pankaj bhadouria shares a bts post that leaves fans in shock
5 days ago
Desi hacks: 6 super easy ways to include more turmeric in your diet
14 hours ago
Dalgona coffee and other recipes to make with only two ingredients: take a look
1 week ago
Masterchef pankaj bhadouria shares how to make peanut butter at home