Argentina will take on France in the final of the FIFA World Cup 2022 at the Lusail Stadium. KL Rahul says Team India players will be watching the game. 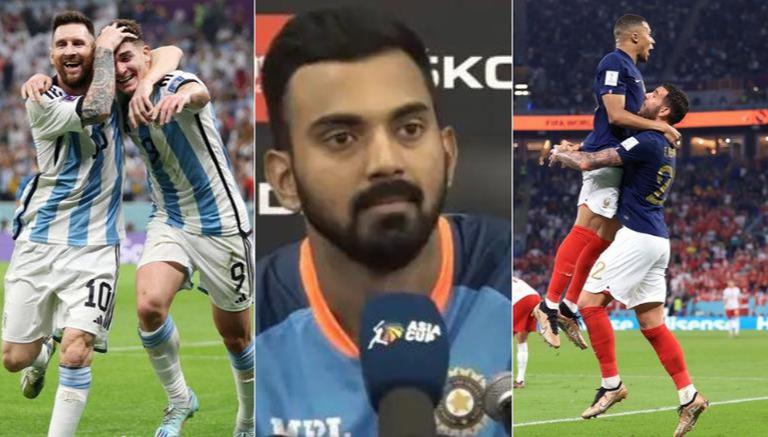 
KL Rahul, India's stand-in captain, has revealed which country his team will support in tonight's FIFA World Cup final between Argentina and France. Speaking to reporters after the first Test match in Chattogram, Rahul stated that whichever team they were rooting for in the World Cup had already been eliminated and that they would now watch the final simply to enjoy the game of football. Rahul remarked that the majority of the Indian players support either Brazil or England.

Despite the fact that both Brazil and England have already been eliminated, Indian players will still watch the final tonight, according to Rahul. The Indian skipper went on to say that he has no idea who is an Argentina or France fan, so they will just enjoy the game and a wonderful meal together. Rahul said it will be interesting to watch the game tonight, adding "We will be divided a little bit but that's what make watching sport fun."

"Whichever team we were supporting are all out already. There were few Brazil fans, there were few England fans. So, I don't really know who is an Argentina or France supporter, so we'll just enjoy the game. We're watching the game together, and we'll have a good meal," Rahul said.

"Like I said five days after a game is really tiring, so enjoy tonight, watch the game. Final of the World Cup, we all love football. Most of you have seen we're always playing football, before warmups, even back in the room," he added.

"FIFA was big early on but the boys have relaxed a bit, there are other priorities, so it'll be interesting to watch the game today. We will be divided a little bit, that's what make watching sport fun,” said Rahul in response as the room burst into laughter," Rahul said.

The Indian Cricket Team on Sunday defeated Bangladesh in the first Test match by a huge margin of 188 runs. After setting a mammoth target of 513 runs, India bowled Bangladesh out for 324 runs in the final innings to win the first Test of their two-match series. Kuldeep Yadav was named the player of the match for picking 8 wickets and scoring a crucial 40 runs with the bat. He registered a five wicket-haul in Bangladesh's first innings and then scalped three wickets in the final innings.