Pakistan limited-overs skipper Babar Azam has been one of the best batsmen in the world across formats recently. The Pakistan international has been in sensational form since making his international debut and is scoring runs at will. Babar Azam is currently in the top five of the ICC rankings across all three formats and is the only player to do so. The elegant right-hander is ranked No. No. 2 in T20Is, No. 3 in ODIs and No. 5 in the purest form of the game.

Babar Azam has always been in the news for his prolific batting but the Pakistan T20I captain has made the headlines off the field recently for showing off his sumptuous 2020 unworn Monaco Gulf Special Edition Tag Heuer watch. Babar Azam took to Instagram and posted a selfie in which he can be seen flashing his exorbitant wristwatch. 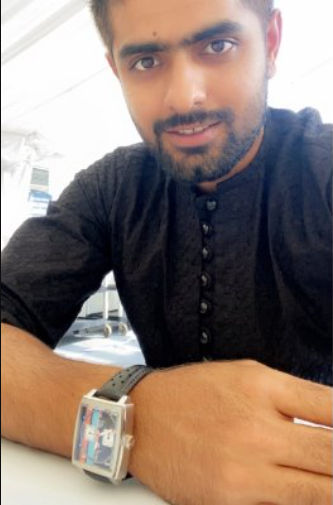 The Babar Azam watch is priced around ₹7.24 lakh ($9,848) and looks splendid with its blue dial and square face. The limited-edition watch is made with 100% calf leather, 100% stainless steel, and 100% Sapphire Crystal. The stunning watch is powered by an automatic movement with an adjustable leather strap and deployment clasp.

Interestingly, the Babar Azam watch price is still slightly lesser than what CSK star Shane Watson earns for instance from playing one season in the IPL 2020. Watson's IPL salary stands at ₹4 crore per season, which means that he is expected to earn anywhere between ₹7.5-8 lakh per day, presuming that he is available for selection for 50 days in the competition.

Meanwhile, Babar Azam recently captained Pakistan in a three-match T20I series against England which ended in a 1-1 draw. While the first game was abandoned due to unremitting rains, England emerged victorious in the second match by 5 wickets. The visitors made a comeback in the third and final T20I and defeated the hosts by 5 runs to draw the series level.

Babar Azam dethroned as No. 1 batsman in T20Is

Dawid Malan dethroned Babar Azam, to grab the 'Numero Uno' spot in the latest ICC T20I Rankings for batsmen. Azam had occupied the top spot in the shortest format back in early 2018 and had been on a roll in the T20I format since then. However, Malan's consistent performances in the previous two series against Pakistan and Australia respectively meant that Babar Azam had to be satisfied being the second-best batsman in a format where he looked invincible.

In the recently released T20I Rankings by the governing body of world cricket, the International Cricket Council (ICC),  English T20I specialist batsman Dawid Malan has taken the top spot with 877 rating points while Pakistan's limited-overs skipper Babar Azam has been pushed to the second spot with 869 points.

Disclaimer: The above Babar Azam net worth information is sourced from various websites and media reports. The website does not guarantee a 100% accuracy of the figures.

IPL 2020: David Miller feels 'players will need some time to get going in match situation'