Dale Steyn Posts Throwback Pic On 'wild' Hairstyle, Fans Demand Him To Get It Back

Dale Steyn took to Instagram to post a photo of himself from the 2014 ICC T20 World Cup where he is seen donning a mohawk hairstyle. Read to know more.

South Africa speedster Dale Steyn took to Instagram to post a photo of himself from the 2014 ICC T20 World Cup, where he is seen donning a 'mohawk' hairstyle. As soon as the South African posted the picture, his fans went nostalgic. Steyn asked his fans whether they remembered the hairstyle that he had donned during the mega event. He captioned the picture "Anyone remember this wild hairstyle? #mohawk #tbt"

Fans went gaga over the Protea pacer's throwback photograph and soon the post was soon flooded with comments from his fans. Some asked him to get the mohawk hairstyle back again while some recalled his fabulous performance at the ICC event. Let's look at some of the fan reactions. 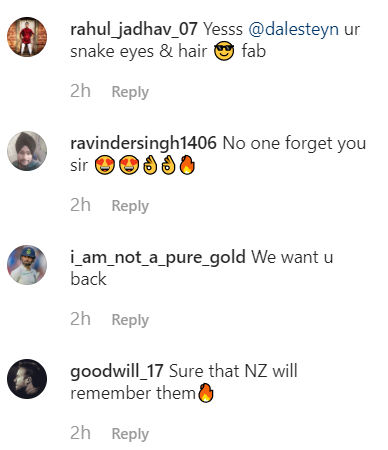 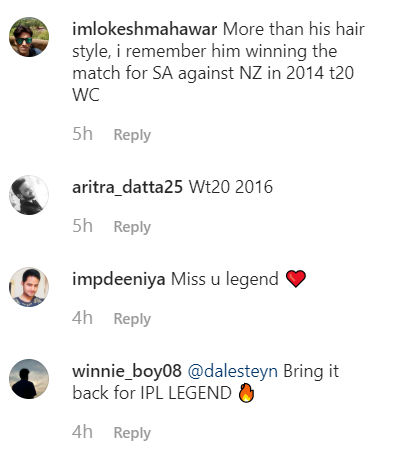 ALSO READ | Rohit Sharma Trolls Kedar Jadhav, Asks Him To Focus On Batting Instead Of Posing

It is no surprise that Steyn has a massive fan following in cricket around the world, especially in India despite not being actively involved in international cricket anymore. The South African pace legend has been in sensational form in the ongoing Mzansi Super League where he is the leading wicket-taker. He has bagged 15 wickets in only 8 matches at an impeccable average of 15.13. His fabulous performances could not have come at a better time as Indian Premier League (IPL) Auction 2020 is around the corner.

Recently, the pacer was in news for his friendly banter with AB de Villiers. It took place in the match between Tshwane Spartans and Cape Town Blitz. In the 14th over of the Spartans’ run-chase, Steyn bowled a full-toss to de Villiers, which he tried to hit out of the park but couldn’t time the ball and ended up hitting it straight back to the bowler. De Villiers immediately put his hand up in apology after which Steyn decided to have some fun with him.

The Proteas fast bowler hit the stumps with the ball while De Villiers had come out of the crease to give him the ball. Thereafter, Steyn raised his finger jokingly and De Villiers put the stumps back in place. The packed audience present at the venue in Cape Town had a good laugh about the funny and light-hearted incident. Even the commentator narrated about the camaraderie shared by two extremely popular figures of South African cricket.

ALSO READ | Ind Vs WI: Team India Drops Hints About The Playing XI For The 1st T20I In Hyderabad