David Warner uploaded an Instagram story in which he was seen standing alongside New Zealand skipper Kane Williamson and welcome him to Sunrisers Hyderabad.

Australia beat New Zealand by a huge margin of 296 runs in the first Test at the Perth Stadium in the western city of the country to take a 1-0 lead in the 3-match Test series. Speedster Mitchell Starc was adjudged Man of The Match for taking 9 wickets. With the IPL 2020 Auction lined up on December 19, Starc refused to participate in the T20 tournament in 2020 as well. However, his teammate Aussie opener David Warner recently tried poking fun at him for his decision.

Post the conclusion of the first Test, Warner uploaded an Instagram story in which he was seen standing alongside New Zealand skipper, Kane Williamson, who was shaking hands with his teammate Mitchell Starc. Warner and Williamson are teammates at Sunrisers Hyderabad. Williamson is also the captain of the franchise. As a result, Warner wrote on his story, “Welcome to Sunrisers Hyderabad @mstarc56.” 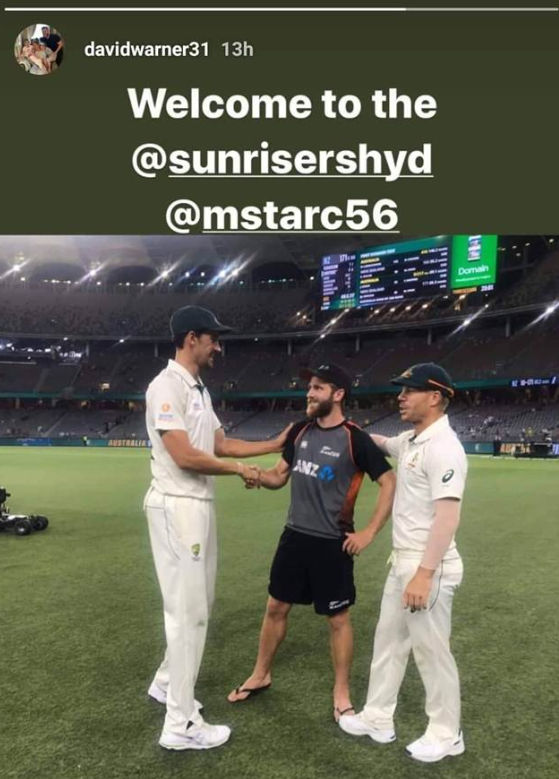 Seeing the story, it seems that Warner is keen to have his Australian teammate at Sunrisers Hyderabad for the upcoming season of the IPL. However, fans noticed the cheeky way in which the southpaw captioned the photo. Starc has not played in the IPL since 2015 but he was one of the costliest picks in the IPL Auction 2018 when Kolkata Knight Riders bought him for a hefty amount of Rs. 9.6 crore. But the pacer suffered an injury just before the IPL and was ruled out from the T20 tournament. The left-arm pacer has emerged as one of the leading pacers for Australia in the last 4-5 years. He has donned the national jersey in 55 Tests, 85 ODIs and 28 T20Is in which he has grabbed more than 450 international wickets.