Hardik Pandya posted a very romantic reply to Natasa Stankovic's latest Instagram post in which he said that his quarantine is going best so far with her.

Team India all-rounder Hardik Pandya and his fiancee Natasa Stankovic have been sharing adorable pictures and videos on social media amidst the India lockdown. Just like many others, the celebrity couple is looking to kill lockdown boredom by being active on social media as they spend time together. On Tuesday, Natasa Stankovic posted a picture on Instagram and asked Hardik Pandya about his quarantine time. The allrounder sent a reply to his fiancee, which made her blush. 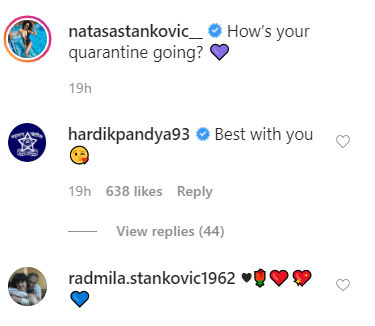 Recently, Natasa Stankovic posted a video in which she called her fiance Hardik Pandya 'Simba'. The video shows Natasa putting lipstick on Hardik Pandya’s forehead to recreate an iconic The Lion King scene in their own way. The video also features the sound effect of The Lion King. She captioned her post by tagged Hardik Pandya in the post.

Hardik Pandya along with his brother Krunal wished their Mumbai Indians teammate and West Indies captain Kieron Pollard on his birthday on Tuesday, taking to Twitter for the same.

Let's celebrate together once this all goes away Polly â¤ï¸ Happy birthday big guy ðŸ¤—âœŒðŸ¾ pic.twitter.com/te4HXs0Xz2

PEOPLE HAVE PLEDGED SO FAR
LATEST NEWS
View all
11 hours ago
Ex-skipper Mashrafe Mortaza hits out at Bangladesh Cricket Board for forcing him to retire
8 hours ago
MFE Vs IS Dream11 prediction, top picks, team and Vanuatu T10 League live game info
12 hours ago
Ravi Shastri trolled on Twitter for photo on World Environment Day tweet
8 hours ago
Rohit Sharma recalls Shikhar Dhawan fooling Tamim Iqbal by his singing abilities in 2015
10 hours ago
Suresh Raina reveals how good a cricketer Irfan Pathan was at the peak of his career