India all-rounder Hardik Pandya took a hilarious meme on him and his elder brother Krunal very sportingly in an Instagram story.

India all-rounder Hardik Pandya took a hilarious meme on him and his elder brother Krunal very sportingly in an Instagram story. Pandya had posted an image of himself and Krunal from 2011 where the future superstars could be seen posing at what appears to be Mumbai's western suburbs. The younger Pandya took to social media and wrote "Throwback to 2011. How time changes".

That caught the attention of meme-makers instantly. Within a day of posting that photo, a page named 'The RealShit Gyan' merged that photo with another one Pandya posted earlier and a 'Hum Saath Saath Hai' still of Mohnish Bahl with a caption: 'ye toh sach hai ki bhagwan hai (It is true that God exists)'.

The meme was a hilarious dig at Pandya brothers who shot to fame from being unknown cricket players (2011 photo) to popular Indian sportspersons (2020 photo) with a massive fan following — thanks to 'God exists'.

Pandya reacted to it saying 'Legendary'.

Hardik Pandya is known as one of the most stylish cricketers in India and has gained a reputation for his whacky outfits, which has received pop-culture fame. 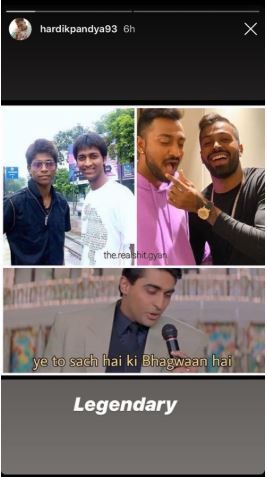 No IPL for Pandyas

Hardik Pandya was all set to make an impact for Mumbai Indians in IPL 2020 which was originally scheduled to get underway on March 29 but has now been suspended indefinitely due to the novel Coronavirus pandemic and the subsequent nationwide lockdown. Along with Hardik, even his elder brother Krunal was expected to showcase his all-round abilities for MI but that did not happen.

Two days after Prime Minister Narendra Modi announced the extension of Coronavirus lockdown, the BCCI formally suspended the 13th edition of the IPL last week until further notice. In a media advisory issued by the board, BCCI Secretary Jay Shah stated that the IPL Governing Council of the BCCI has decided that the IPL 2020 Season will be suspended and will only commence when it is safe and appropriate to do so.

READ | Hardik Pandya And I Were Forced To Share One Bat During Ranji Trophy Days: Krunal Pandya