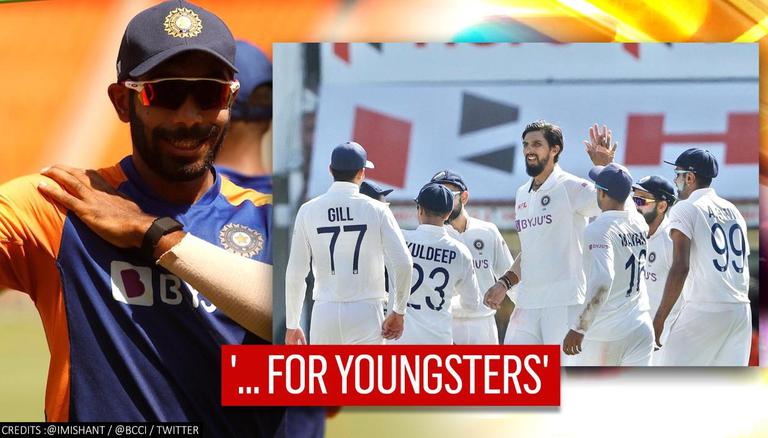 India's Test specialist Ishant Sharma has opined that premium pacer Jasprit Bumrah should groom the younger bowlers of the side while predicting that he would go on to play the longest for the side among the current crop of bowlers. Ishant Sharma's remarks come ahead of India's third Test against visitors England at the Motera stadium in Ahmedabad on Wednesday. As
Ishant Sharma is set to make his 100th appearance in a Test for the Men in Blue, he chose Jasprit Bumrah to outlast other bowlers among the current lot playing for Team India.

READ | Ahead Of His 100th Test, Ishant Sharma Prioritises 'winning' Over Personal Milestones

Speaking to the reporters in a virtual press conference ahead of the third Test, Ishant Sharma picked Jasprit Burmah to lead the way for the youngsters in the side. Sharma remarked that Bumrah's style of grooming upcoming bowlers will be very significant for the side. Further, Ishant Sharma stressed that every bowler in the Indian team under skipper Virat Kohli had a different job to do and emphasized the need to identify the strength of the bowler and backing it up.

WTC is like a World Cup for me': Ishant Sharma

"I am just focused on how to win this series and qualify for the finals of the WTC. I just play one format, WTC is like a World Cup for me, if we play the finals and then we go on to win, the feeling would be the same as winning the World Cup or the Champions Trophy,"  said Ishant during a virtual press conference on Monday.

Third Test to be a D/N affair

The third Test match will be played under lights with the pink-ball. This will be the second time that India will be hosting the pink-ball Test match and third overall. Their first Day-Night Test was against Bangladesh at the iconic Eden Gardens in November 2019 where they had registered a comprehensive win.

However, the Men In Blue's second Test match under lights which was also their first one overseas turned out to be a forgettable one as they tasted bitter defeat at the hands of Australia in December 2020 where Virat Kohli & Co. ended up registering their lowest-ever Test score of 36. Coming back to the India-England series, currently, the four-match Test series is leveled at 1-1. After suffering a humiliating 227-run loss in the series opener at the MA Chidambaram Stadium, Chennai last week, a determined Indian team staged a remarkable comeback in the second Test match at the same venue to hand a mammoth 317-run defeat to the visitors.