Taking a jibe at the new logo, Jasprit Bumrah on Friday commented on RCB's Instagram post unveiling the logo, "Cool logo. Looks like my bowling action as well."

As Royal Challengers Banglore unveiled the franchise's new logo ahead of the upcoming edition of the Indian Premier League, Team India's pace spearhead Jasprit Bumrah noticed something that was missed by others. Taking a jibe at the new logo, Bumrah on Friday commented on RCB's Instagram post. "Cool logo. Looks like my bowling action as well," the speedster commented. 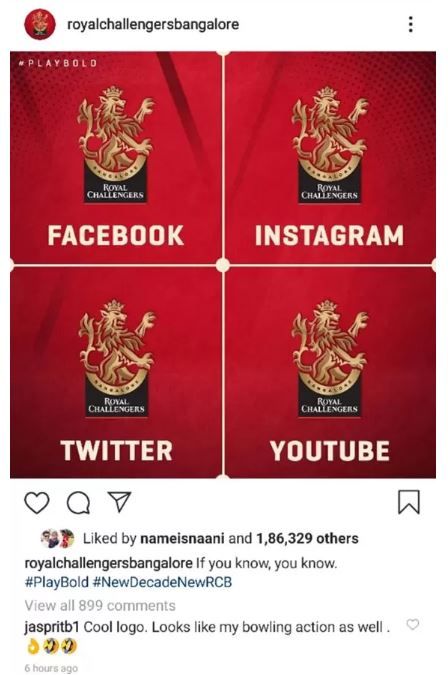 Kohli ecstatic over the new logo

Skipper Virat Kohli was also ecstatic as the team unveiled its new logo ahead of the upcoming edition of the Indian Premier League. A day earlier, RCB's posts from its social handles had mysteriously disappeared, giving rise to speculations of a potential rebranding of the side. Skipper Virat Kohli was himself taken aback to find RCB disappear off the face of the earth in a flash and took to Twitter to express his concerns. RCB gave their fans the perfect gift on Valentine's Day as the new logo was unveiled. Virat Kohli took to Twitter to express that he was thrilled to see the new logo and that he could not wait for the IPL to kick-off.

The ‘New Decade, New RCB’ move comes days after they agreed on a deal with Muthoot Fincorp as their title sponsor for the upcoming IPL 2020. The Virat Kohli-led franchise announced a three-year partnership with Muthoot Fincorp Ltd. As per the deal, there will be a 'jersey-front' logo placed prominently on the playing and training jersey.  RCB are yet to win an IPL title and will be looking to break their duck in the 2020 season.

RCB did some good signings in the IPL Auction 2020, in order to fill the gaps that the franchise wanted to fix. Coming into the auction with a purse of Rs. 27.9 crore, the franchise acquired the services of Australian limited-overs skipper Aaron Finch for Rs. 4.4 crore. RCB also purchased South African all-rounder Chris Morris for the 3rd highest price in the IPL Auction 2020  i.e. Rs. 10 crore. RCB bought back the experienced Dale Steyn (Rs. 2 crore), while also adding Kane Richardson (Rs. 4.4 crore) to their ranks. They also snapped up exciting young wicket-keeper Josh Phillippe.