Kane Williamson was quick to respond to the video by praising Steve Smith and saying that he was not surprised to see Australian star mastering the latte art.

With the international cricket schedule being hit by the coronavirus pandemic, cricket superstars have taken to social media platforms to stay in touch with the fans and entertain them with various videos. Had cricketing activities been underway currently, the likes of Steve Smith, Kane Williamson, Virat Kohli and David Warner would have been busy playing in the Indian Premier League (IPL). However, due to COVID-19, the BCCI decided to suspend the IPL until further notice.

While being under self-isolation, the likes of David Warner, Kevin Pietersen and Yuzvendra Chahal have been gathering a lot of views with their videos on TikTok. Apart from these two, the likes of Steve Smith, Virat Kohli and Kane Williamson are also spending their time posting videos on Instagram. On Monday, New Zealand captain Kane Williamson shared a video on Instagram in which he is trying his hand at coffee art.

In the latest video, Kane Williamson can be seen making a fern (New Zealand Cricket's logo) on a cup of coffee and received reactions from Steve Smith and Virat Kohli. Virat Kohli lauded Kane Williamson's attempt at coffee art and commented that it wasn't as elegant as his backfoot punch. 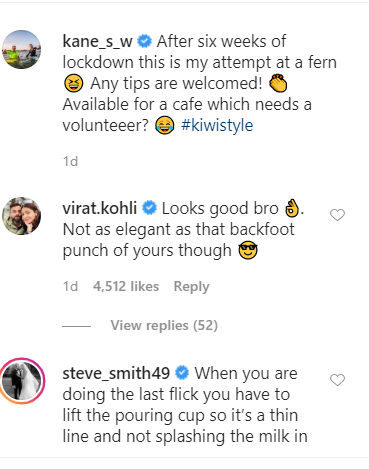 Steve Smith, on the other hand, shared coffee art tips with Kane Williamson. He wrote that while doing the last flick, one has to lift the pouring cup so it's a thin line and not splashing the milk in. Kane Williamson, in his response to Steve Smith's comment, requested the prolific Australian batsman to provide a 'demonstration video' over the same.

After Kane Williamson's request for demo video, Steve Smith obliged to the New Zealand captain's  request to come up with his own video. In the video, Steve Smith seemed to have got the technique right as he lifted the pouring cup during the final flick.

Smith poked fun at Williamson and himself by saying that they should stick to hitting balls. Williamson was quick to respond to the video as he praised Smith, saying he was not surprised to see the Australian star mastering the latte art. Apart from Williamson, David Warner also responded to the video, saying he won't even attempt this.