India's skipper Virat Kohli played a sensational knock to guide the hosts through their most successful run-chase in T20s at Hyderabad on Friday in the first T20 against the West Indies. The batting maestro, along with KL Rahul, chased down 207 runs with over eight balls to spare, lighting up the show for the fans at Hyderabad. Kohli looked out of touch in the initial half of his innings and the frustration that was building up since then was channelized to exploit the best of his form once he flicked the ball off the middle of the bat off Kesrick Williams. Once Kohli found the right touch, there was no stopping the run-machine as he took on every Windies'bowler and took them to the cleaners, including his counterpart Kieron Pollard.

READ | Watch: Virat Kohli Mocks Kesrick Williams After Taking Him To The Cleaners

One of the best moments of Kohli's innings were the two magical flicks that left the entire cricketing universe open-mouthed in awe, struck by its majesty and beauty. From netizens to cricketers, the flick had everyone talking about it and admiring skipper Kohli's skills with the timber. One such reaction came from former England cricketer Kevin Pietersen who was left fascinated by Kohli's flick and he took to social media to remark the flick as 'quite something' that he had seen that evening. Pietersen's reaction to Kohli's flick, "Holy smokes", says it all about how the shot has got the cricketing universe riled up.

READ | 'I Focus On Doing The Job,' Says Virat Kohli After Powering India To An Emphatic Victory 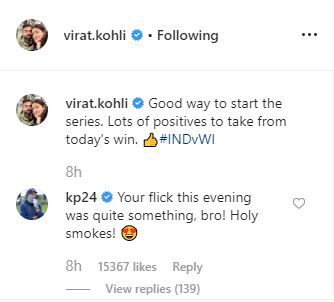 Chasing a huge total of 208, India lost the wicket of 'Hitman' Rohit Sharma early. Skipper Virat Kohli and KL Rahul added 100 runs for the second wicket stand. The visitors then struck back after removing Rahul (62) after which wicket-keeper batsman Rishabh Pant was involved in a 48-run third-wicket stand with Kohli. Even though Pant and Shreyas Iyer were dismissed quickly, the Indian skipper did not lose his focus and anchored the run chase well as he took the attack to the West Indian bowlers. In the end, he took the Men In Blue past the finish line with eight balls to spare. He remained unbeaten on a 50-ball 94 at a strike rate of 188 which included six boundaries and the same number of maximums. Meanwhile, 94 is also his highest score in T20I cricket. His previous highest score in the shortest format was 90 which he had scored against Australia Down Under in 2016.