It is unlikely that a day goes by in India where no major news event or occurrence in any sphere becomes a talking point on Twitter. Tuesday too was dominated with news of the Mumbai power cut in the morning, Farooq Abdullah’s controversial comment on Article 370 and the Dream11 Indian Premier League in the evening. However, none of them were on the topmost Twitter trends as an international celebrity was most-talked in India, at least on Twitter.

The top six hashtags at 9.50 PM on Monday were all dedicated to South Korean pop star Jimin. One of the members of the popular band BTS, Jimin, whose full name is Park Ji-min, celebrated his birthday, turning 25.

Despite the usual talking point around that time, the Dream11 IPL going on, and the encounter between Bangalore and Kolkata underway, the players hardly found a mention on the trends. Aaron Finch was the top most non-Jimin trend at no 7, followed by Virat Kohli at no 9. The Bangalore captain’s unbeaten century partnership with AB de Villiers and even the latter raining sixes in a blitzkrieg knock of 73* in just 33 balls, were all sidelined. 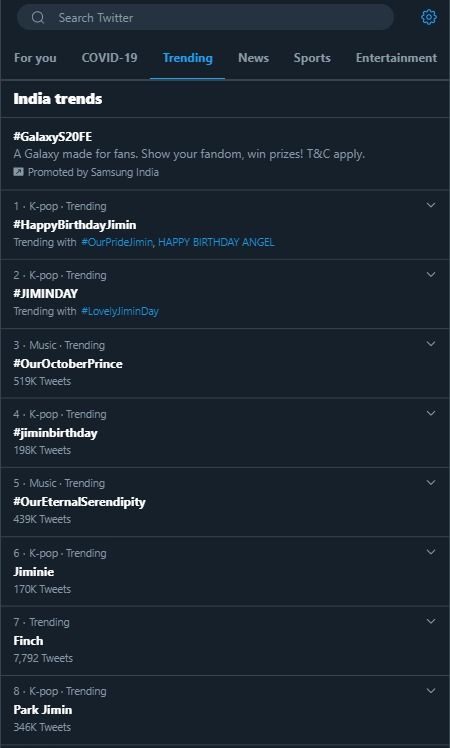 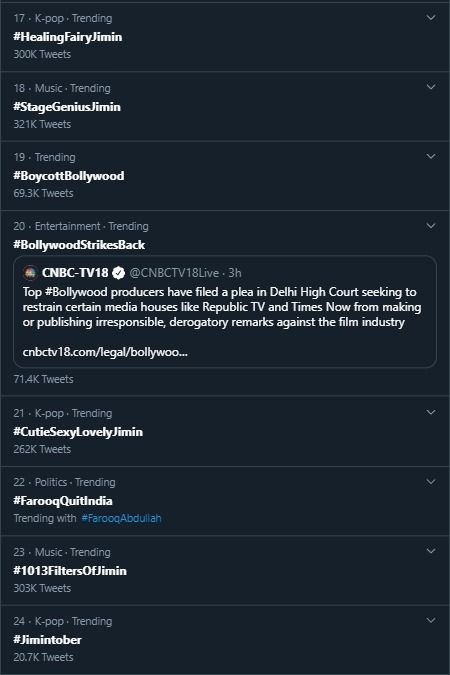 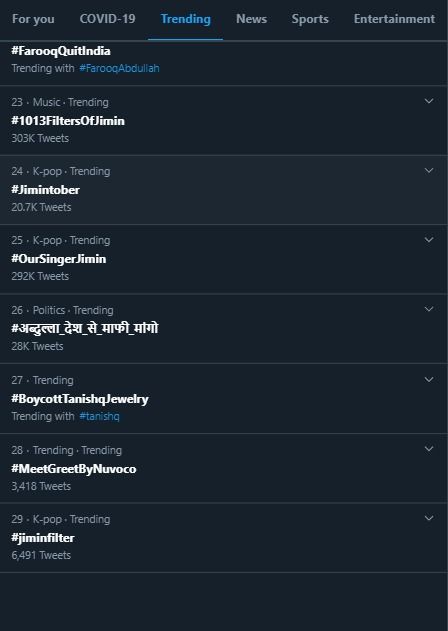 Around 20 hashtags, and many of them with interesting titles like #JiminBorntoShine, #AngelVoiceJimin, #HealingFairyJimin, #1013FiltersofJimin, #CuteSexyLovelyJimin, out of 30, were dedicated in honour of the young singer.

Surely anyone who might logged in to Twitter to know what was happening in India would have had a hard time searching for the more relevant trends. The domination of trends and the outpouring of love showed that Jimin had a humongous fan following in India.

Not just Jimin, BTS as a band is also hugely popular across the world, with 31.4 million fans on the platform.

Apart from holding the record for the highest-selling album in South Korea, the band has even been credited for their role in the economy, as well as being a factor for the attraction of tourists.

Right from making it to theTime's 100 most influential people in the world and Forbes Celebrity 100 in 2019 to  addressing theUnited Nations General Assemblies, the band’s popularity has been acknowledged on a global scale before.

READ: BTS's 'Map Of The Soul: ON:E' Concert Manages To Mesmerise As Many As 114 Million Fans