Fans breathed a sigh of relief as wicketkeeper-batsman Sanju Samson got a place in the playing XI in the third and final T20 against Sri Lanka in Pune on Friday. Sanju Samson did not feature in the team's XI even after being roped in for many tours, therefore leaving fans frustrated. While many believed that Sanju Samson could play better than Rishabh Pant owing to his experience in the domestic cricket, the team continued to back Pant, but have decided to test their bench strength with the inclusion of Sanju Samson for the final T20.

Sanju Samson gets a game finally

Samson IN, Pant OUT
Manish Pandey IN, Dube OUT
Chahal IN, Kuldeep OUT#INDvSL pic.twitter.com/VwetQg5TZ5

Finally @BCCI gave a chance to Sanju Samson, a player with great calibre will surely make India proud someday with his skill and technique. All the best.👍#INDvSL 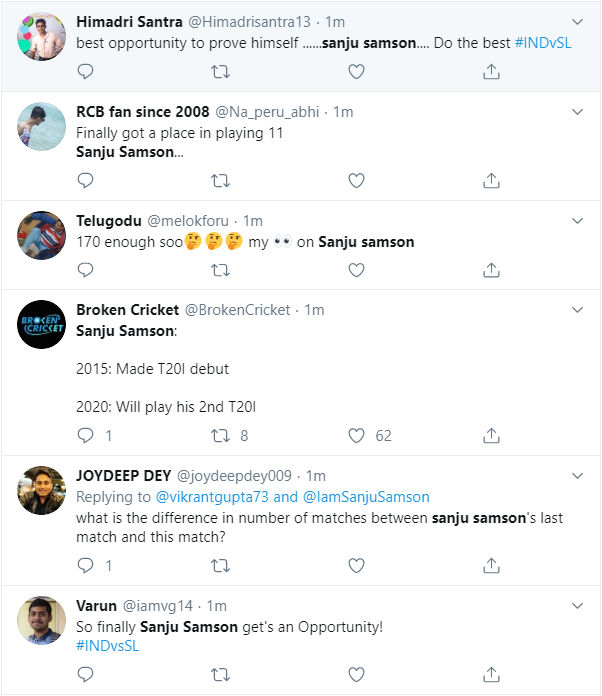 Even though Shikhar Dhawan managed to make a cut into the playing XI, former Indian cricketer Gautam Gambhir wanted Sanju Samson to open the innings. While speaking to the official broadcaster, Gautam Gambhir said India should have tried opening the innings with Samson. The 25-year old Samson recently had a good outing in domestic cricket. He registered a record-breaking double hundred during last September’s Vijay Hazare Trophy. Sanju Samson was part of India’s squad in the home series against Bangladesh and West Indies as well. However, the Kerala based cricketer did not manage to make a cut into the playing XI and had to celebrate India's series wins from the dugout. Speaking about his repeated exclusions from the squad, Gautam Gambhir said that it will become very difficult for Sanju Samson to feature in playing XI once Rohit Sharma returns to the squad.