SA vs AUS Dream11 prediction: South Africa will face Australia in the 1st ODI of Australia's tour of South Africa 2020. The match will be played at Boland Park.

South Africa will face Australia in the first ODI of Australia's tour of South Africa 2020. The match will be played at Boland Park in Paarl on Saturday, February 29 at 4:30 PM IST. Quinton de Kock will captain the home side and Aaron Finch will lead the Australian side. Let us take a look at SA vs Aus 1st ODI Dream11 prediction, SA vs Aus 1st ODI Dream11 squads and other details.

Also Read: Kagiso Rabada Learns To DJ With Father At Pub Ahead Of SA Vs Aus Series Decider

After a rather one-sided Twenty20 International series where the hosts suffered two of their worst defeats, South Africa will lock horns with Australia in the first of the three ODIs. South Africa's best show against Australia was a 5-0 whitewash back in 2016. They also registered a 10-run win over Australia in their 2019 World Cup campaign.

The Quinton de Kock-led South Africa will head into the series as underdogs. They will be without their experienced duo of Faf du Plessis and Rassie van der Dussen. The responsibility of leading the batting unit will be firmly on the shoulders of de Kock. In the bowling department, Kagiso Rabada will shoulder the responsibility of providing breakthroughs. 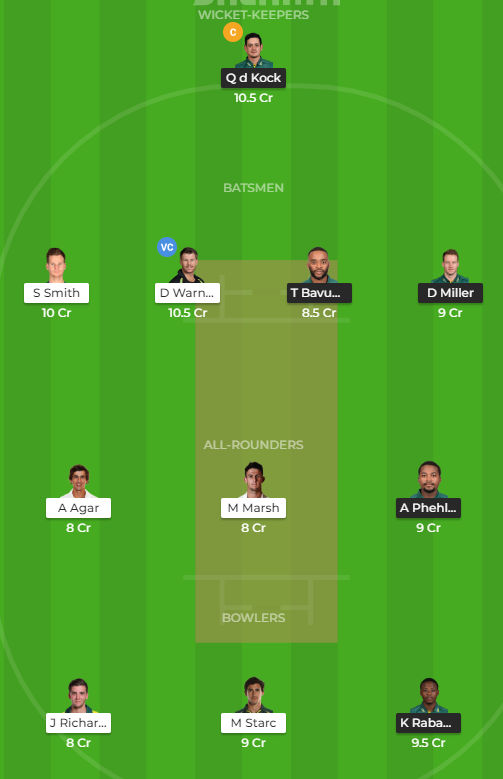 Australia are the favourites to win this match.

Please keep in mind that these SA vs AUS Dream11 suggestions are made with our own analysis. These selections do not guarantee positive results in your games.