ICC Hall of Famer and former Indian cricketer Sachin Tendulkar recalled an unexpected encounter from years back with hotel staff at Taj Coromandel in Chennai as India headed to the capital city of Tamil Nadu for their first ODI against West Indies. Master Blaster Sachin Tendulkar, who is a part of the broadcasting team, recalled the encounter with hotel staff during an India-West Indies series when the man reminded Sachin Tendulkar to wear his elbow guard and how it turned out to be very helpful for him. Taking to Twitter, Sachin Tendulkar urged the fans to help him find that person and said that he was looking forward to meeting that person. Fans were melted by the humility and generosity of Sachin and he won the hearts of the Tamil speaking fans as he tweeted out the message in Tamil. 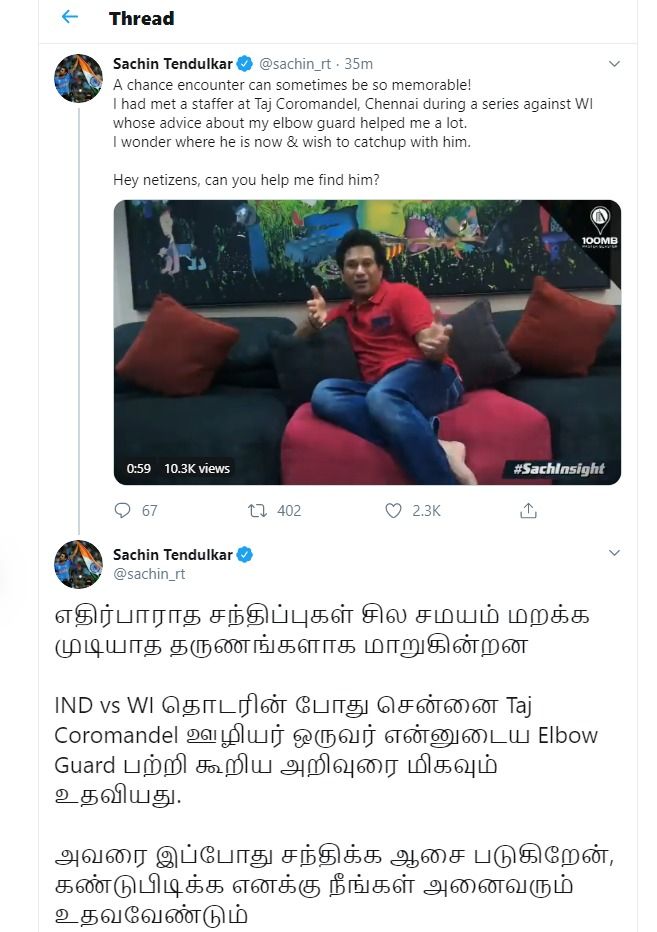 READ | Prasad Claims Dhoni Has 'achieved Everything Under The Sun', Trumps Talks On Retirement

The 'Hitman' became the first Indian batsman to smash 400 sixes across all formats of the game in the 3rd T20I on Wednesday. Meanwhile, Sharma also is the third-highest six-hitter in international cricket. He is currently behind West Indies power-hitter Chris Gayle (534) and Pakistan all-rounder Shahid Afridi (476). Apart from Sharma, former skipper, MS Dhoni is the other Indian with the most number of maximums in international cricket with 359 big hits to his name.

READ | Ranji Trophy: Dinesh Karthik And Karun Nair Get Into A Heated Argument After The Match

After beating West Indies in the series-decider to win the T20I series 2-1, the focus now shifts to the 50-overs format. The first ODI will be played in Chennai on Sunday. Co-incidentally, the Men In Blue's last ODI series had taken place against West Indies in their backyard which India went on to win 2-0. Virat Kohli & Co. will once again look to clinch another series win in the ODI format against the Caribbeans. Test opener Mayank Agarwal has been named as Shikhar Dhawan's replacement for the upcoming three-match series. The second one will be played in Vizag on December 18 and the final match will be played in Cuttack on December 22.

READ | Aus Vs NZ: Stuart Broad Calls Out Kane Williamson After He Refuses To Walk