#sweetieoftheday a lil bit of embarrassment but worth watching him blush #thatsmile stay tuned for more!" wrote Sakshi Dhoni as she decided to tease her husband

Did you know former Indian cricket captain MS Dhoni can blush and look adorable? Courtesy his wife Sakshi Dhoni, the skipper was caught in a bit of situation when she decided to tease him. In the two videos shared on Instagram, Sakshi is seen following her husband MS Dhoni, calling him 'Sweetie Sweetie'. While MS Dhoni was completing the formalities at the hotel reception, Sakshi tells him, "At least look at me. Why is my sweetie not looking at me?."

She later also calls him "cutie of the day" and then asks the hotel staff standing next to Dhoni, "He's so cute, no?" And in the next video, Sakshi again says, "How cute are you looking," and finally asked MS Dhoni if he was blushing. To this, MS Dhoni immediately told Sakshi's friends, "Can you do something to throw her out?"

The couple who was attending a wedding also hit the headlines when singer Armaan Malik dragged them on stage and sang 'Kaun Tujhe' from 'MS Dhoni: The Untold Story'. They both are currently at Kanha Tiger Reserve (KTR), Mandla and will be staying till January 31. Sakshi recreated her 'Sweetie of the Day' moment while they were at the tiger safari.

Watch the video below —

#sweetieoftheday 🤣🤣🤣🤣🤗 a lil bit of embarrassment but worth watching him blush ❤️ #thatsmile stay tuned for more ! 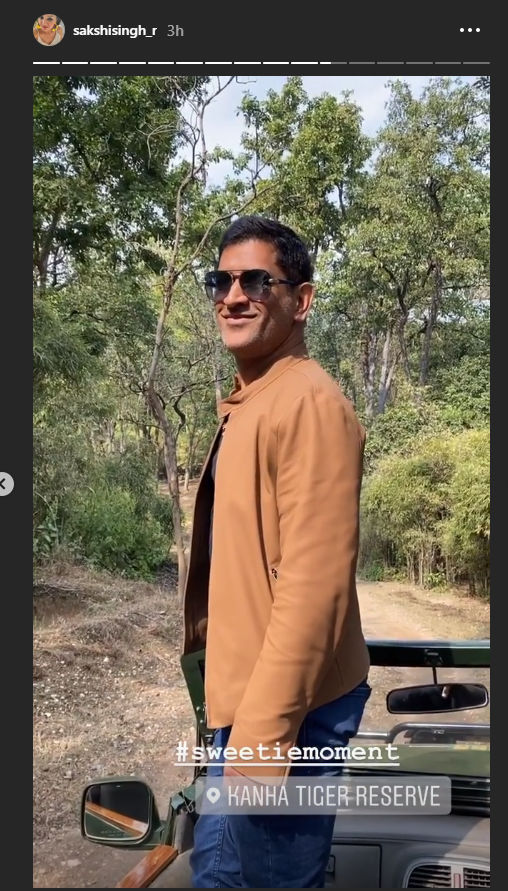 Recently, MS Dhoni went to offer prayers to the ancient idol of Goddess Durga at the Deori Maa Temple near Ranchi. He went there apparently to seek blessings for the IPL 2020 in which he will lead Chennai Super Kings (CSK). MS Dhoni has led CSK to two consecutive finals after their return from a two-year suspension, winning it once. In 2018, the CSK beat Sunrisers Hyderabad to lift the trophy but lost to Mumbai Indians by 1 run in the IPL 2019 final.