While the entire world is in self-isolation, Indian cricketers Shreyas Iyer and Hardik Pandya were involved in a series of funny posts on Instagram.

While the entire world is in self-isolation, Indian cricketers Shreyas Iyer and Hardik Pandya were involved in a series of funny posts on Instagram. Indian middle-order batsman Shreyas Iyer took to his Instagram and posted a video, where he was seen showing off his wristwatch.

However, when you swipe to the next image, you see that the forearm in the previous image was of Indian all-rounder Hardik Pandya. In the last post, the duo can be seen laughing about the same. Iyer captioned the video as, "Expectation vs Reality". Take a look;

The duo has played together for the Mumbai Indians in the Indian Premier League (IPL) for a couple of years. Additionally, Hardik Pandya was set to return to the Indian team after a long break against South Africa in the three-match One-Day series. But due to the Coronavirus pandemic, the series got cancelled and has further delayed the all-rounder's return to international cricket.

READ: Sehwag labels India as favoruites to win T20 WC with game-changer Pandya back in squad

While the video garnered a lot of likes and comments, the comment form KL Rahul grabbed eyeballs. The Karnataka lad left an interesting remark on the Instagram post saying, "Guys, wash your hands", which was intuned with the COVID-19 outbreak. To this, Iyer replied that they did not shake hands by sharing a cross sign emoji. 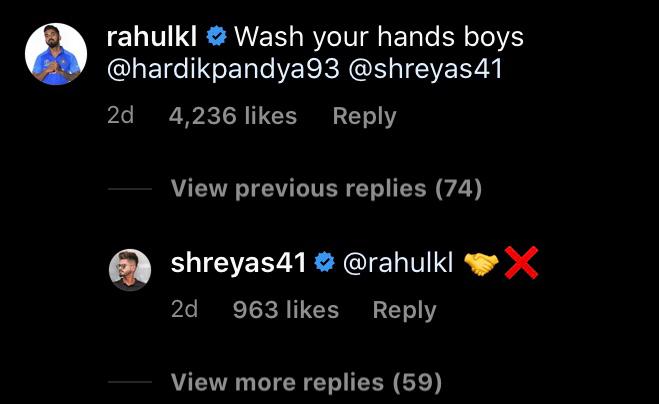 Furthermore, the trio has played a pivotal role in India’s limited-overs side and are also touted to be the future of the side. Rahul and Iyer were in sensational form during India’s rather dismal tour in New Zealand while Hardik Pandya, who recently recovered from a back injury, played some jaw-dropping knocks in DY Patil T20 tournament 2020.