Kohli, who has returned to the squad after missing last 3 Tests Down Under, exuded confidence in Rishabh Pant and remarked that he will continue to be 'backed' 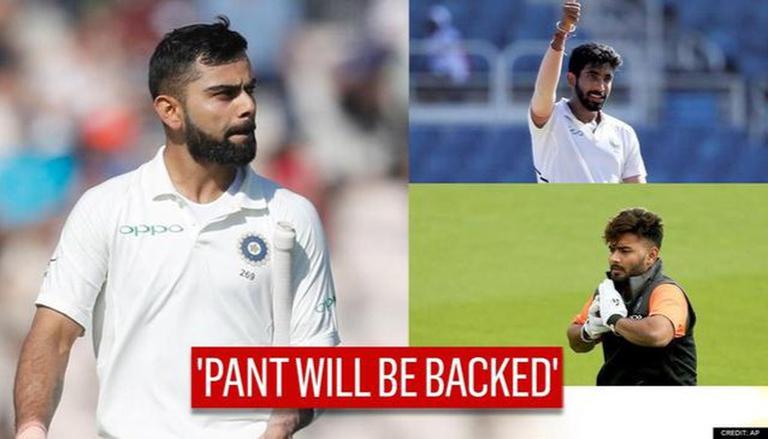 On the eve of the first Test against England, Indian skipper Virat Kohli has confirmed that Rishabh Pant will assume wicketkeeping duties at the Chepauk following his glorious form in Australia. Kohli, who has returned to the squad after missing last three Tests Down Under, exuded confidence in the youngster and remarked that Pant will continue to be 'backed'. The Indian skipper also shed light on the Chepauk pitch, his camaraderie with Ajinkya Rahane and plans for Kuldeep Yadav.

"Rishabh Pant will play for us in the first Test. He will keep wickets. He made a impact performance for us recently and is high on confidence. He will continue to be backed, can be a consistent match-winner for us," Kohli told media in the pre-match press conference on Thursday. The Indian skipper also confirmed that Jasprit Bumrah will start at the Chepauk highlighting his heroics against England in the last home series. He also hinted at continuing with the opening pair of Shubman Gill and Rohit Sharma in the long haul.

READ | England Suffer A Blow On Eve Of Chepauk Game, Opener Ruled Out Of First 2 Tests Vs India

'Kuldeep in scheme of things'

Speaking of plans for Kuldeep Yadav, who has been warming the bench since he sprung to limelight, Kohli said that with the start of the home season the chinaman will be in the 'scheme of things' hinting at his inclusion in the Tests against England. The chinaman failed to make it into the playing XI in Australia, despite Team India being marred with injuries. Asserting that the management tries to give goals to every player, Kohli sounded hopeful as he stated that Kuldeep Yadav 'has worked on certain areas'.

Highlighting that the pitch at Chepauk seems batting-friendly, Kohli noted that it will have something for the fast bowlers as well. "The combination we have had in the past, where players can bat and bowl, will be our outlook going forward," he added. "The camaraderie within the team is based on trust. Ajinkya Rahane fulfilled his duties in Australia with flying colours. We enjoy each other's company and batting together. We stay in touch off the field as well," the Indian skipper said while speaking of Rahane's role in the dressing room and Australia.

With the finale berth of the World Test Championship being the prize of the series, the Tests between India and England promise to be cracker as both teams are riding high confidence with a series win against Sri Lanka and Australia.  The tour kicks off with the first Test that will be played in Chennai's M.A. Chidambaram Stadium. The second Test match will also be played at the same venue between February 13-17. The newly renovated Motera Stadium in Ahmedabad will be contesting the final two games (Feb 24-28) & (March 4-8) respectively. The BCCI has also opened gates for crowds from the second Test onwards allowing fans to catch the action live.

WE RECOMMEND
Virat Kohli, Rohit Sharma delight fans by training together at last after nearly 12 months
Is Virat Kohli bigger than the game? THIS stunning social media stat strengthens the claim
Virat Kohli set to gain whopping 14000% rise from first-ever IPL salary in 2021 season
'Let us all stay united': Virat Kohli hopeful of resolution amid row over Rihanna's tweet
Ajinkya Rahane reveals how Virat Kohli keeps him on his toes as vice-captain
Listen to the latest songs, only on JioSaavn.com