Indian spinner Yuzvendra Chahal is a jovial character who is renowned for his antics. The leg-spinner keeps on entertaining his teammates, as well as, fans on and off the field with his gimmicks. Chahal's social media activities are also a proof of his unending shenanigans.

The 30-year old was at it once again as he trolled teammate Rishabh Pant for his caption. It all started when Pant uploaded a photo of himself wearing a red T-shirt which has popular cartoon character Tom from the cartoon series Tom and Jerry on it. In the caption, Pant asked his followers if they have watched the cartoon or not?. Pant wrote, "How many of you have watched this cartoon ???????????? ? #17".  That's when Chahal decided to have some fan at Pant's expense.

Chahal asked Pant which cartoon he's talking about from the picture, thus referring to him as 'cartoon'. The leggie commented, "You or Tom bro?" Chahal's indirect jibe at Pant made his comment hysterical.

Chahal's comment on Pant left fans in splits. Several reactions poured in as fans lauded the Indian spinner's wicked sense of humour. Afghanistan spinner Rashid Khan also commented on the post and pulled Pant's leg. The two leg-spinners' comments made Pant edit the caption as he changed it and wrote, "How many of you have watched this cartoon on my T-shirt? #17". 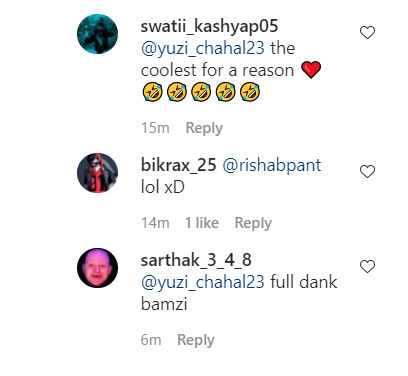 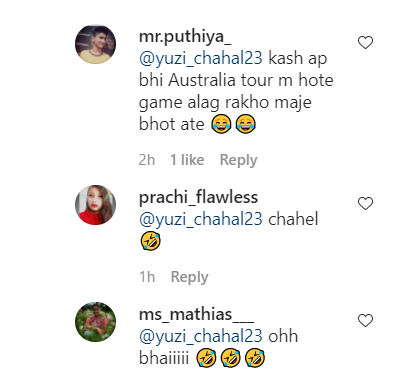 Meanwhile, Pant recently put in stunning performances in the Border-Gavaskar trophy and was instrumental in India's 2-1 triumph. The southpaw ended up as the top-scorer for India in the series with 274 runs in five innings at a brilliant average of 68.50 which includes impactful knocks in the final two Tests at the SCG (97) and Brisbane (87* where he also hit the winning boundary).

Riding on the back of brilliant performances down under,  Pant attained his career-best ICC Test batting rank. The explosive batsman jumped to the 13th position in the ICC Test rankings as he became the top-ranked wicketkeeper on the table. Pant is followed by South African skipper Quinton de Kock, who holds the 15th place in the rankings. Pant will look to replicate his performances in the upcoming four-match India vs England 2021 Test series. The India vs England 2021 Test series is set to commence on February 5 in Chennai.