Juventus star Cristiano Ronaldo has blocked a website (Transfermarkt) after it valued the Portuguese international at just £67.5 million.

Juventus star Cristiano Ronaldo was left furious after a website Transfermarkt published his estimated valuation. This forced the Juventus star to block the website hastily. The same website had also claimed that the Portuguese international was not the most searched football star this past weekend after his surprise appearance at Estadio Santiago Bernabeu to attend El Clasico.

Cristiano Ronaldo has been in phenomenal form this season for the defending Serie A champions. The Portuguese has netted 25 goals along with three assists in 30 games this season for the Old Lady. However, the website decided to value the star at £67.5 million despite a string of magnificent performances.

HAHAHAH Cristiano Ronaldo blocked @Transfermarkt on Instagram because they value him lower than Bernardo Silva😂😂😂 pic.twitter.com/MxDw7Nd6VB

Tranfermarkt estimates the market value of each football star and a similar valuation was done for Cristiano Ronaldo. The Portuguese international’s valuation was close to £90 million when he had left Real Madrid in 2018. Transfermarkt, in an Instagram comment, has claimed that they cannot tag Ronaldo in any of their posts since he had blocked their account.

The comment by Transfermarkt claimed that Cristiano Ronaldo blocked them because he was not happy with his estimated valuation by the website. His valuation makes him the second most valuable football star in Juventus after Paulo Dybala. 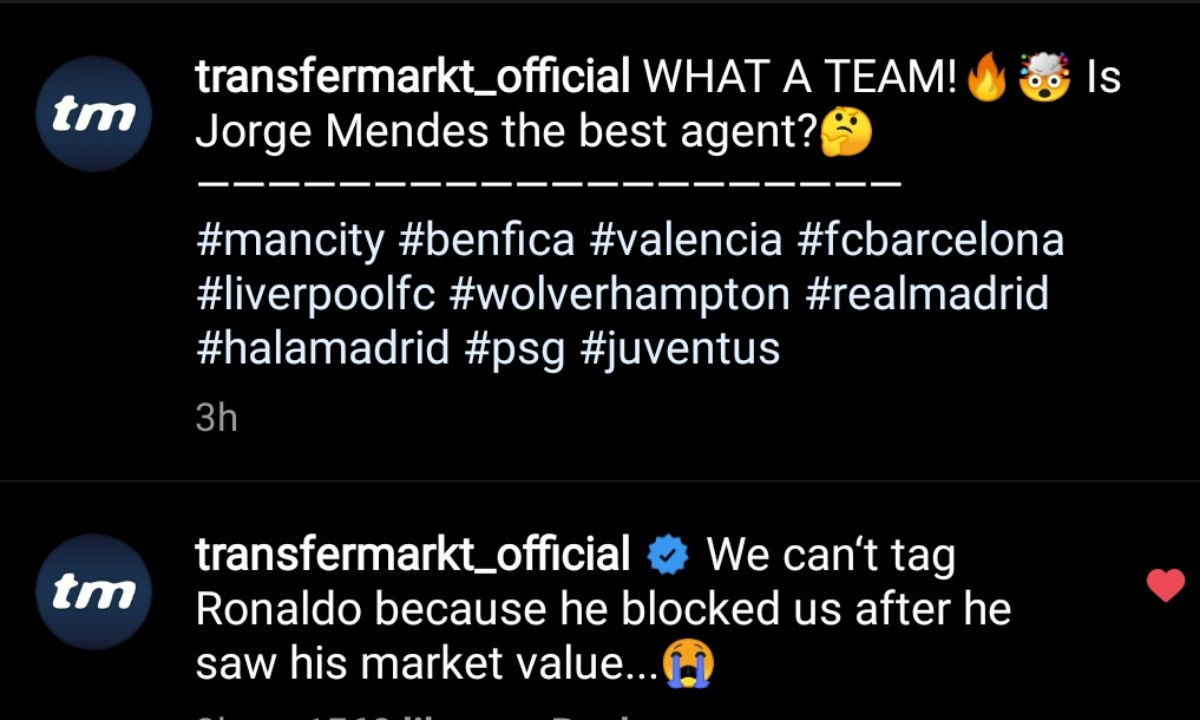 Christian Eriksen, who secured a move to Inter Milan from Tottenham Hotspur in January, is the most valuable player in the league. The Dane is valued at an astonishing £81 million, while Dybala is valued at £76.5 million. Inter Milan striker Lautaro Martinez is ranked third in terms of valuation with £72 million.