Kerala Blasters Look For Jairo Rodrigues' Replacement; Defender Says He Will Be Back

Kerala Blasters FC recently confirmed the news of Jairo Rodrigues' injury and stated that they are searching for a replacement to fill the void left by him.

Kerala Blasters FC have got off to a very poor start to their ISL 2019-20 season with just one win in four games (D1 L2). Adding to their misery, their star defender Jairo Rodrigues met with an injury. Kerala Blasters FC recently confirmed the news of the Brazilian's injury and stated that they are searching for a replacement to fill the void in their defence. The Tuskers announced the news through Twitter and also informed that Rodrigues is under medical rehabilitation at the club.

Will be fit to play in two weeks: Rodrigues

ISL clubs have an option to replace a player if he is suffering from a long-term injury. However, after an hour of the statement from Kerala Blasters, Jairo Rodrigues took to Instagram to update his fans about his injury. He mentioned that he will be fit to play within two weeks. The statements released by the club and player are completely contradictory. On one hand, Kerala Blasters want to replace the player and on the other, Rodrigues assures that he will be fit within no time.

There seems to be a lot of miscommunication between the club and the player. The fans will be expecting Kerala Blasters to clear the air as soon as possible. Mario Arques and Gianni Zuiverloon are the other injured players on the Kerala Blaster's roster. Coach Eelco Schattorie will look to lift Kerala Blaster's performance after the international break. Kerala Blasters will next play Bengaluru FC on November 23, 2019, Saturday at the Sree Kanteerava Stadium. 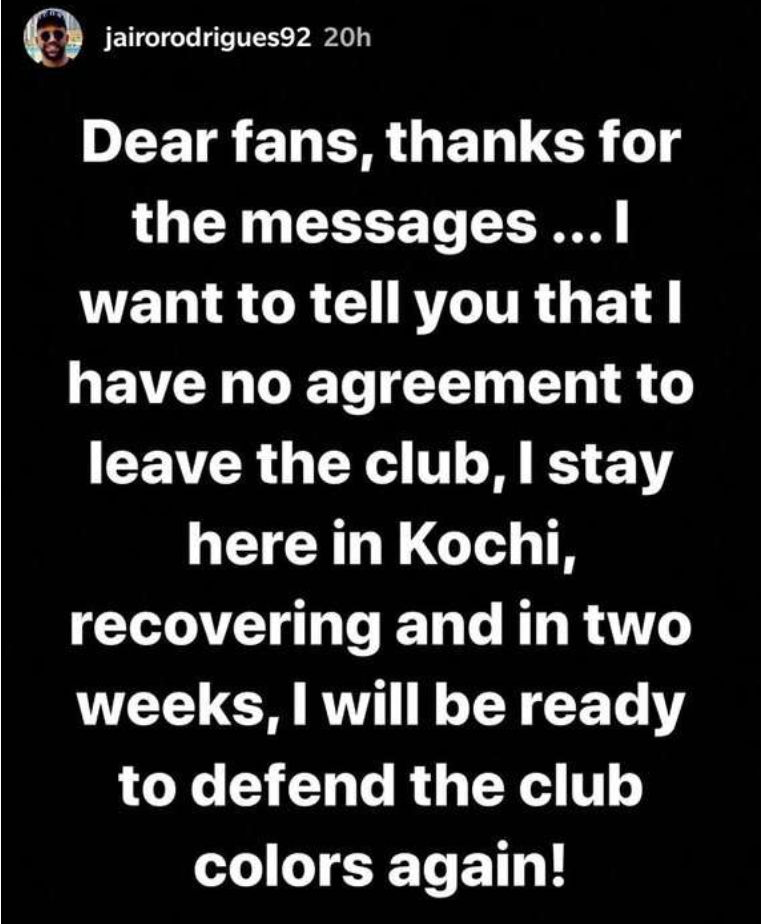