Switzerland made a winning start to their FIFA World Cup 2022 campaign with a 1-0 win over Cameroon in a Group G fixture. 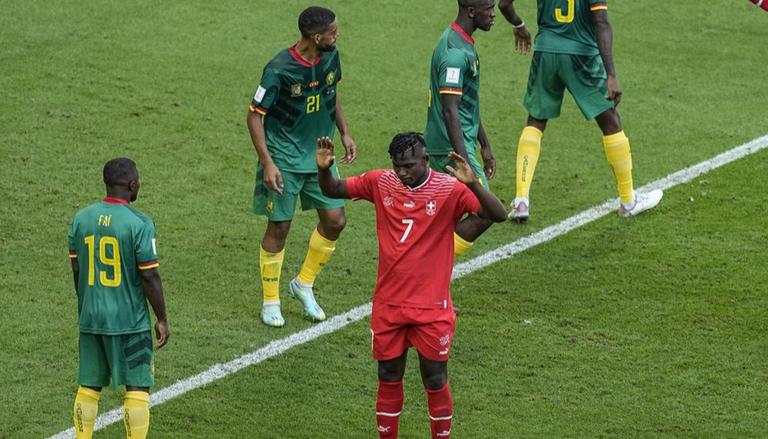 
Switzerland made a winning start to their FIFA World Cup 2022 campaign with a 1-0 win over Cameroon in a Group G fixture. Breel Embolo scored the winning goal which was enough for the Swiss team to pick up all three points and top the group temporarily. However, the striker decided against celebrating the goal during the match.

Breel Embolo goal came in the 48th minute as he hit a right-foot shot inside the box following Xherdan Shaqiri’s low pass. However, there was no jubilant celebration with Embolo only holding his arms out wide, before raising his hands in a gesture of apology. The decision behind the non-celebration was because the Swiss striker was born in Cameroon. The African-born player left Cameroon with his family when he was five years old. They spent a few years in France before settling in Switzerland.

This was the first instance in the history of the World Cup that a player from a nation had scored against their country of birth. The 25-year-old has so far made 60 appearances for the Swiss national team and scored just 12 goals. He earned a call-up to the 2018 FIFA World Cup in Russia but failed to score a single goal in the tournament. Currently, Embolo plies his trade for AS Monaco in France's Ligue 1.

Cameroon were without a win in the FIFA World Cup for 20 years and was looking for its first one by dominating the first half, however, they missed several chances to seize the initiative. Bryan Mbeumo tested goalkeeper Switzerland goalkeeper Yann Sommer in the 10th minute before Karl Toko Ekambi sent his rebound over the bar. The first goal of the match came just three minutes into the second half when Shaqiri got to the byline and pulled the ball back to an unmarked Embolo inside the box.

An almost identical move almost wrapped up the match for Switzerland, but Ruben Vargas's shot was pushed wide by Cameroon goalkeeper Andre Onana. Switzerland managed to keep hold of the lead and win the match to secure all three points. Speaking about the contribution of Embolo, Switzerland head coach Murat Yakin said: "We know his story. I told him before the game 'Breel, friendship until the start, then they are your opponents. Football write such stories but he completed his mission. I am very happy with his performance."

Cameroon's losing streak at the World Cup finals has extended to eight matches after losing to Switzerland. The Indomitable lions of Africa have a chance to improve that record while facing Serbia in the second match of FIFA World Cup 2022 on November 28.