Why Was Lionel Messi Wearing A Black Cloak While Lifting The World Cup? Here's The Reason

Lionel Messi is now the fourth-highest goal-scorer in World Cup history with 13 goals to his name. He surpassed Brazil legend Pele in the list. 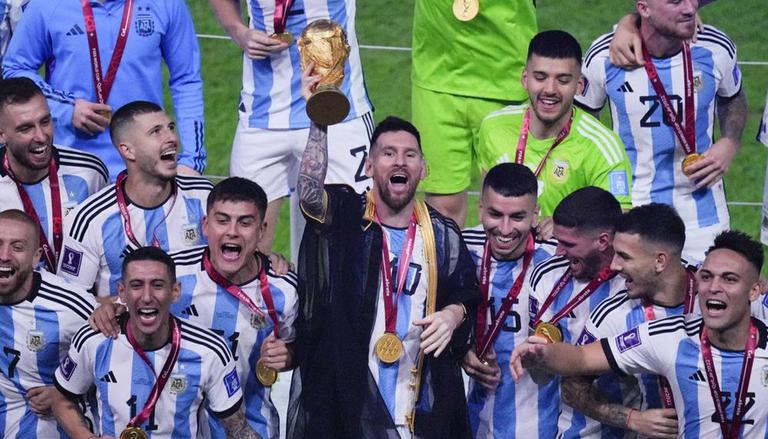 
Lionel Messi completed his trophy cabinet as he finally won the World Cup after defeating France in the final at the Lusail Stadium on Sunday. Messi led Argentina from the front, netting two goals in the match to help his side gain a crucial lead over France. However, Kylian Mbappe delayed the win for Messi and Argentina by registering a hat-trick and levelling the score twice to take the game into penalty shootouts. Argentina eventually won the shootouts to make the trophy their won.

Why was Messi gifted a black cloak before lifting the World Cup title?

While lifting the World Cup for Argentina, Messi was seen wearing a black cloak, about which many on social media are confused. So, why did Messi wear the black cloak following Argentina's win at the World Cup? Messi was handed the black cloak to wear as it is part of the tradition in Qatar. It is a ceremonial 'bisht' cloak usually worn at formal events. Messi was draped in the cloak by the Emir of Qatar, Sheikh Tamim bin Hamad Al Thani, who himself was seen wearing one during the presentation ceremony.

As the cloak was being handed to Messi, he looked puzzled and required some assistance from the Sheikh to wear it. After Messi wore the cloak, he was handed the World Cup by the Sheikh and FIFA President Gianni Infantino. Messi received the trophy and joined his teammates for a photo session. He can be seen wearing the cloak in the trophy lift photos that have gone viral across the world.

Messi also broke a host of records as he registered a brace in the World Cup final. He became the first player in the world to win two Golden Ball awards in the tournament's history. Messi had won the player of the tournament award in the 2014 World Cup despite Argentina losing the final to Germany. Messi has also become the player with the most appearances, most minutes, and most goal contributions in World Cup history.

Earlier, when Messi converted a penalty in the 23rd minute of the match, he became the first player to score in the group stage, Round of 16, quarterfinals, semifinals, and final of a single World Cup. Argentina have won the World Cup for the first time in 36 years and Messi played a vital role in it. Messi is now the fourth-highest goal-scorer in World Cup history with 13 goals to his name. He surpassed Brazil legend Pele in the list.