During the heavyweight rematch between Tyson Fury & Deontay Wilder, Fury wore 'Nigeria' mouthguard to which Anthony Joshua responded by calling him 'gladiator'.

The heavyweight rematch between Tyson Fury and Deontay Wilder ended in Fury managing to knock out his American rival, however, it was Fury's gumshield that got the most attention. Fury made a statement by wearing a green and white mouthguard emblazoned with the word 'Nigeria' and ever since fans have been speculated that it was an intentional jibe at Anthony Joshua, with whom Fury has been trying to set up a fight for some time.

But now Joshua, in a recent Instagram story broke the silence and posted a photo of Fury's face with the gumshield in full view. Joshua captioned the photo 'Gladiator' and now fans believe that this could mean that the world's top two punchers are finally getting on. And now that he won the match against Deontay, Fury might enable himself to step up against Anthony Joshua for the WBO, WBA (Super), IBO, and IBF heavyweight titles. 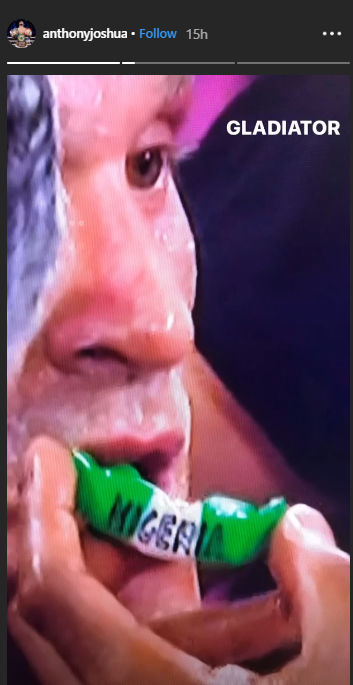 On Sunday morning, the heavyweight rematch between Fury and Deontay Wilder also ended in Fury incredibly managing to knock out his American rival in the seventh round in the WBC heavyweight title. After dominating almost six rounds, Tyson Fury successfully landed a crisp combination of jabs, which made Wilder go down the canvas. He is currently the new WBC champion and also the only man to defeat Wilder in professional boxing.

READ: Tyson Fury Opens Up About His Tansformation From 400lbs To WBC Champion

The British heavyweights, Fury and Joshua, have often wanted to face each other inside the squared ring but the mega-fight is yet to be materialised into reality. While most of the boxing fans consider Anthony Joshua and Tyson Fury to be fierce rivals, a lot of people don’t know that Joshua once even challenged Fury on FaceTime while 'The Gypsy King' was sipping beer in a local pub.

It was a friendly interaction as both Tyson Fury and Anthony Joshua expressed mutual respect towards each other. However, that did not decrease their urge to fight each other. After exchanging a warm greeting, Anthony Joshua clearly asked Fury to mention the date of their fight. To which, Fury laughed and said that they are probably going to fight in 2021. The entire conversation happened over a video chat and the bartenders of the pub also got to enjoy the interaction between two of the greatest heavyweight boxers of the modern era.