NBA stars have brought back the 'I can't breathe shirt' from 2014 as a sign of protest against George Floyd's murder. Analysing the significance of the t-shirt. 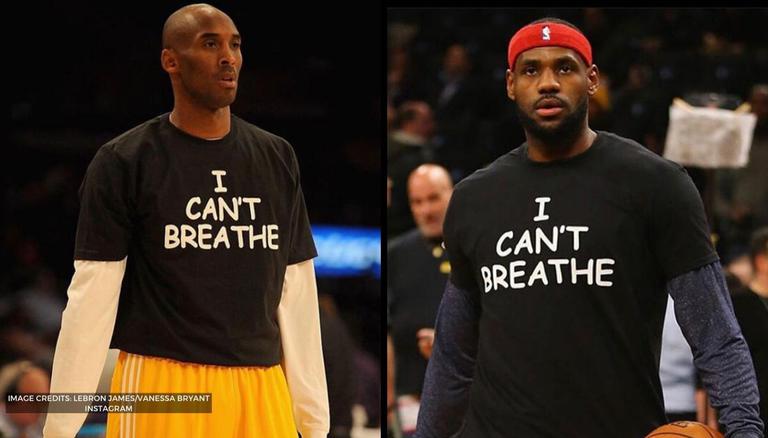 The tragic murder of George Floyd, an unarmed African-American, by a police officer in Minneapolis brought back the memories of the 2014 death of Eric Garner - another unarmed African-American who fell victim to police brutality. Despite an almost six-year gap between the two incidents, the death of the two men feels more relevant than ever. The George Floyd protests in the United States are a result of frustration and anger among the masses reaching the boiling point after multiple incidents of racial injustice in the US. The deaths of George Floyd, Ahmaud Arbery and Breonna Taylor in 2020, all have two things in common - the trio was African-American and was killed by a current or former member of the police force.

Amid the nation-wide protests in the US, NBA and NFL players have also shown their support for the cause. Many have reposted their photos wearing the 'I can't breathe shirt' as a sign of protest against the unjust killing of George Floyd. The likes of NBA stars like the late-Kobe Bryant, LeBron James and Derrick Rose wore the 'I can't breathe shirt' in 2014 as a protest against the death of Eric Garner. Now in 2020, the posts are once again headlining social media in the aftermath of the death of Floyd.

On July 17, 2014, Eric Garner died in New York, after NYPD officer Daniel Pantaleo put him in a chokehold while arresting him. The incident was recorded by Ramsey Orta, a friend of Garner, on his cell phone. Garner, who was allegedly accused of selling loose cigarettes without tax stamps, got involved in a tussle with Pantaleo after the latter attempted to handcuff him. The tussle resulted in Garner being put in a chokehold for several minutes. Eric Garner repeatedly pleaded to be released by the officer. The video captured showed Garner saying, "I can't breathe," 11 times. Garner later died in the hospital after having a heart attack on his way to the same.

Fast forward to 2020 and as per reports, George Floyd's death had a similar pattern while repeatedly pleading 'I can't breathe' to the police officer Derek Chauvin. The video recorded by a bystander saw Chauvin pressing his knee against Floyd's neck for several minutes. Just like Garner, Floyd passed away while panting 'I can't breathe.'

The NBA preseason ahead of the 2014-15 season saw the likes of Derrick Rose, Kobe Bryant, LeBron James and several players don the 'I can't breathe shirt' as a protest against the ruthless murder of Garner. Kobe Bryant wore that t-shirt ahead of the Lakers' game against Sacramento Kings in 2014. Several players in the NFL like running back Reggie Bush and former guard Davin Joseph also donned shirts and boots with the message 'I can't breathe'.

In 2014, Derrick Rose wore a “I can’t breathe” shirt during warmups, starting a movement inside of the NBA. These were the last words that came from the 43-year-old New York man, Eric Garner who was choked to death by a New York City police officer. pic.twitter.com/ehEcRU5LZK

Respect to Reggie Bush for standing in solidarity with the people. #EricGarner #ICantBreathe
(photo: @MearsDaniel) pic.twitter.com/KARlAl5oYK

Floyd's death has once again spurred the return of 'I can't breathe shirts' as a sign of protest. Last week, Lakers star LeBron James began the movement when he shared his 2014 photo wearing that t-shirt to Instagram. Subsequently, Vanessa Bryant, wife of Kobe Bryant, shared the picture of Kobe wearing the t-shirt. Thousands of protestors across the major cities in the United States have conducted peaceful marches signs of 'I can't breathe' and 'Black Lives Matter'. Blackout Tuesday was the social movement conducted earlier this week, which was supported by athletes and celebrities across the globe.

Thousands of protestors chanting “move bitch, get out the way” to NYPD cops blocking them after curfew. #ICantBreathe #GeorgeFloyd #BlackLivesMatter pic.twitter.com/TlIrVz6Lxd