Jake Paul revealed that he’ll easily grab Conor McGregor’s attention if he beats Nate Diaz as the Stockton native has defeated the Notorious One in the past. 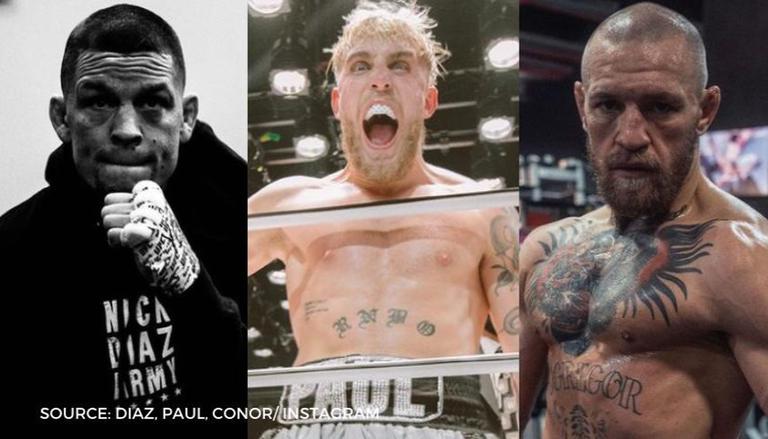 Even though Jake Paul is not an experienced boxer, he’s making waves in the industry as he’s already getting the attention of some big-name fighters. Jake Paul, who recently called out boxing legend Floyd Mayweather, is currently preparing to fight former ONE FC and Bellator welterweight champion Ben Askren in April 2021. After that, The Problem Child has UFC standouts Nate Diaz and Conor McGregor on his radar.

Also Read l Jake Paul vs McGregor: Conor gives his thoughts on Paul's boxing: “I’m Not So Against It”

Jake Paul wants to fight Nate Diaz in near future

While talking to Heavy, Jake Paul said that his team is already talking to Nate Diaz, who is also interested in the clash. Paul claimed that the Stockton Slugger has only a few fights left in the UFC, “so we’ll see what happens. If he frees up from the UFC, that’s the fight”. Jake Paul thinks that Nate Diaz will be an easy fight for him, considering the UFC welterweight has never fought professionally and he tends to “walk forward” in every fight, making him an easy target for the YouTuber in a boxing match.

Nate Diaz, meanwhile, is also confident that he’ll defeat The Problem Child in a boxing clash. While talking to ESPN’s Ariel Helwani, The Stockton Slugger stated that he’s not a huge fan of Paul and beating the Problem Child in a boxing match would be an easy payday for him. He said he also doesn’t like Jake Paul calling fighters out and wants someone to “tell this guy to shut up”.

While the Nate Diaz bout is intriguing to Paul as he considers it to be more realistic and would also serve a greater purpose in his career, he’s also adamant in fighting Conor McGregor as well. While taking to MMA Junkie's Mike Bohn, Jake Paul revealed that he’ll easily grab McGregor’s attention if he 'embarrasses' Nate Diaz first, as the Stockton native has defeated the Notorious One in the past. However, Paul said that he’s taking one step at a time, with his current focus being former UFC welterweight Ben Askren.

“Once I beat Nate Diaz, once I embarrass him actually, I will be undeniable to McGregor because I will say, ‘Hey, bubba. Listen to me, guy, you little Irish guy: I beat the guy who beat you. So you have to fight me.’ That’s why this is so exciting,” Jake Paul added.