However, the manner in which Hardik Pandya was dismissed is generating a lot of buzz on social media. Pandya got out hit-wicket while playing a whip shot. 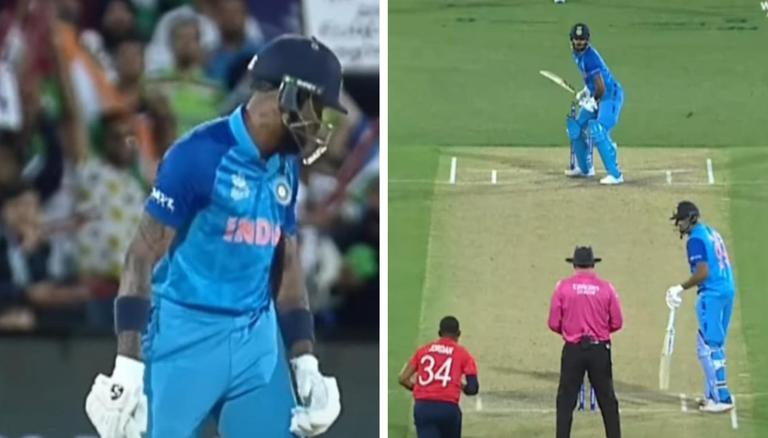 
After a slow start in the second semifinal of the ongoing T20 World Cup against England, the Indian batting lineup recovered well courtesy of impactful knocks from Virat Kohli and Hardik Pandya. While Kohli played yet another anchor's innings to help India rescue from a shaky start, Pandya came in and took the English bowling attack for a ride as he hit shots all around the park. Pandya was dismissed on the last ball of the Indian innings for 63 off 33 balls.

However, the manner in which Pandya was dismissed is generating a lot of buzz on social media. Pandya got out hit-wicket while playing a whip shot toward the square leg boundary. Pandya managed to find the gap to send the ball to the boundary rope but in the process of stepping back to play the shot, he was dismissed hit wicket. India lost four runs in the boundary due to Pandya getting out hit wicket off the final ball of the innings.

Pandya scored his last fifty runs off just 18 balls to help India post 168/6 in 20 overs. Netizens have flooded social media with posts appreciating Pandya for his impactful knock in a crunch game for India.

Serious player, Hardik Pandya. Has given India a chance in this game. Ball turning a bit too. Probably 10 short but definite chance.

Earlier we used to feel excited whenever Hardik came to bat. Now we feel secured that he'll get the job done. He has clearly grown as a cricketer. Well played @hardikpandya7 👏🏽 #INDvENG #T20WorldCup pic.twitter.com/MHZ0HxkYKR

After being asked to bat first by England, India scored 168/6 in 20 overs courtesy of some impactful batting from Kohli and Hardik Pandya. While Kohli scored 50 off 40 balls, Pandya got out hit wicket on the last ball of the innings for 63 off 33 balls. Chris Jordan picked three wickets for England, while Adil Rashid and Chris Woakes scalped one wicket each. England will now need to score 169 runs in 20 overs to win the game and qualify for the final of the tournament. England are cruising comfortably toward the target with all 10 wickets intact.