Nick Kyrgios was called 'Satan' by a Russian tennis player, who asked him to get off her Instagram. The comment was made after Kyrgios responded to a picture.

Russian World No.79 Anna Kalinskaya stirred controversy on Thursday by calling Australia tennis star Nick Kyrgios a 'Satan' and asked him to get off her Instagram posts and profile. The comment was made after Kyrgios responded to a picture posted by Kalinskaya. It can't yet be said whether it is banter or a serious conversation.

On Sunday, Kyrgios had posted a picture on his Instagram with a female friend named Krystyana Haridemos. The woman was wearing ripped jeans. Kalinskaya had posted a comment on the photo, asking Kyrgios to buy his female friend some new jeans.

When Kalinskaya posted a picture of herself on Instagram wearing jeans, Kyrgios saw an opportunity to fire back. He commented, “Didn’t you screenshot a picture on my Instagram and send it to me this? See ya x.” Reacting to the comment, Kalinskaya demanded that he leave her Instagram page. 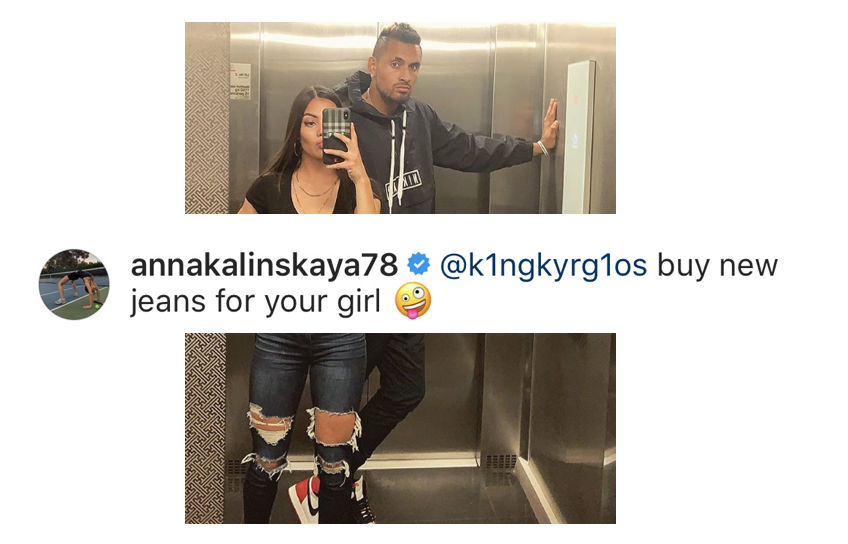 Kyrgios is known for his volatile nature and was recently slapped with a fine of $113,000 at the Cincinnati Open 2019. During the tournament, there were rumours that he was dating Kalinskaya. The Australian player had appeared in the Russian’s box during the Citi Open 2019 in Washington.

During the US Open, Kalinskaya had complimented one of Kyrgios’ picture from the tournament. She had commented that he looked amazing. Later, the Aussie tennis ace had uploaded a story celebrating Kalinskaya’s win in the opening round of the US Open.

There were reports that the two were spending a significant amount of time with each other in New York. Later, during the Laver Cup in Geneva, while playing Federer, Kyrgios was distracted by a woman sitting in the audience. During the end of the season, Kyrgios sat in the sidelines due to a collar bone and shoulder injury. He briefly played in the Davis Cup but has since decided to stay away from the game as his injury persisted.