Novak Djokovic's Instagram live video sees him looking well on track to match Roger Federer's challenge, while in the second story he is just waving his racket.

After losing in the semi-finals of the Australian Open, World No.4 Roger Federer has not stepped onto the tennis court. He underwent knee surgery recently and was set to miss out on the French Open since he was aiming to make a return at the Wimbledon Championships in June. However, with Wimbledon getting cancelled, Roger Federer's return to the court is set to take longer than expected due to the coronavirus outbreak across the globe. Roger Federer recently created his own quarantine challenge by posting a fun drill via his Twitter account and asking top sportspersons to showcase their own home training routine.

The latest Roger Federer challenge video witnesses the Swiss ace practising a solo drill wherein he is knocking the ball against a wall while standing not too far away from it. In the video, he also tagged other sportspersons and celebrities such as Novak Djokovic, Thierry Henry, Lewis Hamilton, Virat Kohli etc. World No.1 Novak Djokovic and Alexander Zverev were quick to respond to this Roger Federer challenge and posted their response on their own Instagram handle.

Here’s a helpful solo drill. Let’s see what you got! Reply back with a video and I’ll provide some tips. Choose your hat wisely ðŸŽ©ðŸ˜‰ðŸ‘Š #tennisathome pic.twitter.com/05lliIqh1h

Novak Djokovic looked well on track to match the Roger Federer challenge on his Instagram live video and in the second story, he can be seen just waving his racquet in the air against the wall, while someone bounces the ball in the background.

Alexander Zverev responds to the Roger Federer challenge too

On the other hand, Alexander Zverev was not too keen on replicating the Roger Federer challenge. In fact, he decided to post a challenge of his own. In his Instagram live story, he can be seen asking for suggestions from his fans. 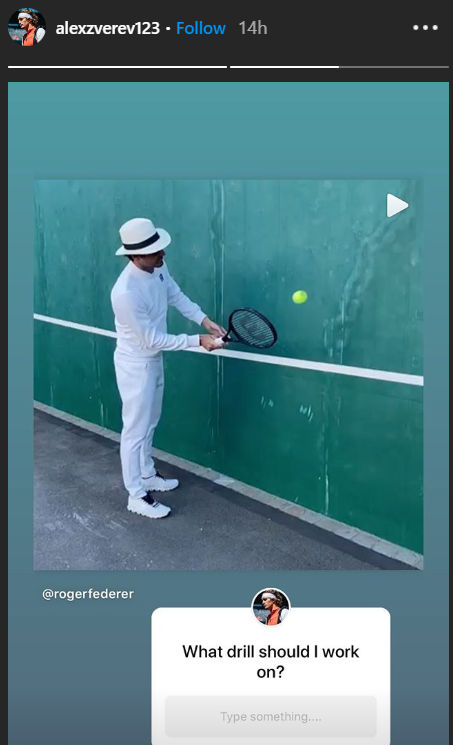