Serena Williams Pairs Up With Caroline Wozniacki For Doubles; Netizens See The Funny Side

Serena Williams and Caroline Wozniacki recently paired up for the first time for a doubles match at the ASB Classic 2020. The duo had a winning start.

Serena Williams and Caroline Wozniacki recently paired up for the first time for a doubles match at the ASB Classic 2020. The duo had a winning start even though they were playing for the first time as a team. They began their campaign by defeating Nao Hibino and Makoto Ninomiya 6-2, 6-4 in an interesting match. Meanwhile, Wimbledon’s Instagram handle recently posted a picture of Serena Williams and Caroline Wozniacki together with a caption. They asked fans to name this duo.

Also Read | Caroline Wozniacki Net Worth, Salary And Why She Suddenly Retired From Tennis

Tennis fans came up with a list of interesting names for this star duo. An Instagram user named emajotafer wrote, "These two seem to be real friends, the way they smile each other looks honest. Like to see that." Meanwhile, others gave different names to this duo. Tennis fans gave names like Scarecrow, Carorena, 2W-Wonderwoman, Serenacki!!!, Carena Willacki and Team Willniacki. 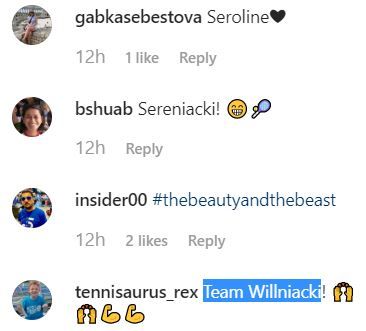 Serena Williams on court in Auckland.

Ready to start her 4th decade on tour.

Caroline Wozniacki, who is all set to retire after the Australian Open, featured in her first doubles encounter since New Haven in 2016. After the match, Caroline Wozniacki stated that it is amazing to be able to share the court with Serena. She said that even if the former World No. 1 missed a shot, Serena would be like - "you did a great job."

Strong play from @SerenaWilliams as she kicks off her 1st round match against Camila Giorgi at @ASB_Classic! pic.twitter.com/vXqA895pRG

PEOPLE HAVE PLEDGED SO FAR
LATEST NEWS
View all
3 days ago
US Open plan in works, including group flights, coronavirus tests
4 days ago
Roger Federer beats Cristiano Ronaldo, Lionel Messi as the highest-paid athlete in 2020
2 hours ago
Rafael Nadal turns 34: World No.2 thanks fans for birthday wishes on social media
4 days ago
Italian Open to be played in Rome in September, says federation president
6 hours ago
Rafael Nadal turns 34: World No.2 expresses conditional desire to play in French Open 2020