Dana Brooke recently posted a video clip on her Instagram page showing her using the Batista bomb on her opponent Lacey Evans. She wrote a flirty caption to it.

WWE Stars Dana Brooke and veteran wrestler Batista have been the talk of the town ever since they started flirting on Twitter. It all started when Batista announced he was single again. Now, it seems like their banter has moved to Instagram. Brooke recently posted a video clip on her Instagram page. The video showed Brooke using the Batista bomb on her opponent Lacey Evans. She wrote a flirty caption (tagging Batista) and said that she hoped Batista wouldn’t mind. She added that she learned from the best and teased that the Batista Bomb was the Brooke Bomb now.

It didn’t take long for Batista to respond. The wrestler-turned-Hollywood star seemed like he did not mind Brooke stealing his move. His advice to her was to start walking alone. Batista also said that no one was using his WWE music. According to him, it was excellent. The video is from the match between Brooke and Evans, where the former is seen delivering a move very similar to the Batista Bomb. 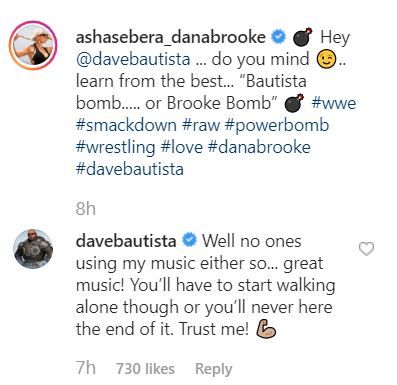 Batista and Brooke have been flirting with each other for quite some time now. Their banter on social media has fans and fellow WWE stars interested. Recently, Brooke had threatened a fellow WWE star Drake Maverick by stating that she would unleash 'The Animal' on him after Maverick dared to flirt with her.

The couple’s Twitter exchange has been loved by the entire WWE universe. Batista has invited Brooke to visit his gym in Tampa. Brooke was quick to respond, asking him to text her. The two have since kept the exchange going on Twitter.