US President Donald Trump congratulated Triple H for completing 25 years in WWE. HHH has been one of the best wrestlers as well as one of the finest heels to have step foot in the ring. The 'Game' was famous for some of his memorable characters in the Attitude Era as well as the Ruthless Aggression era in which he was a prominent member of DX and was famous for his 'Reign of Terror' onscreen between 2002-2005 during which he was also a leader of 'Evolution' which is arguably the best stable of all time.

It so happened that WWE Chairman & CEO Vince McMahon who happens to be HHH's father-in-law took to the micro-blogging site and wrote that no one knew a quarter-century ago that the multiple-time world champion would go no to change 'The Game' forever and that went on to wish him on his successful pro wrestling career. 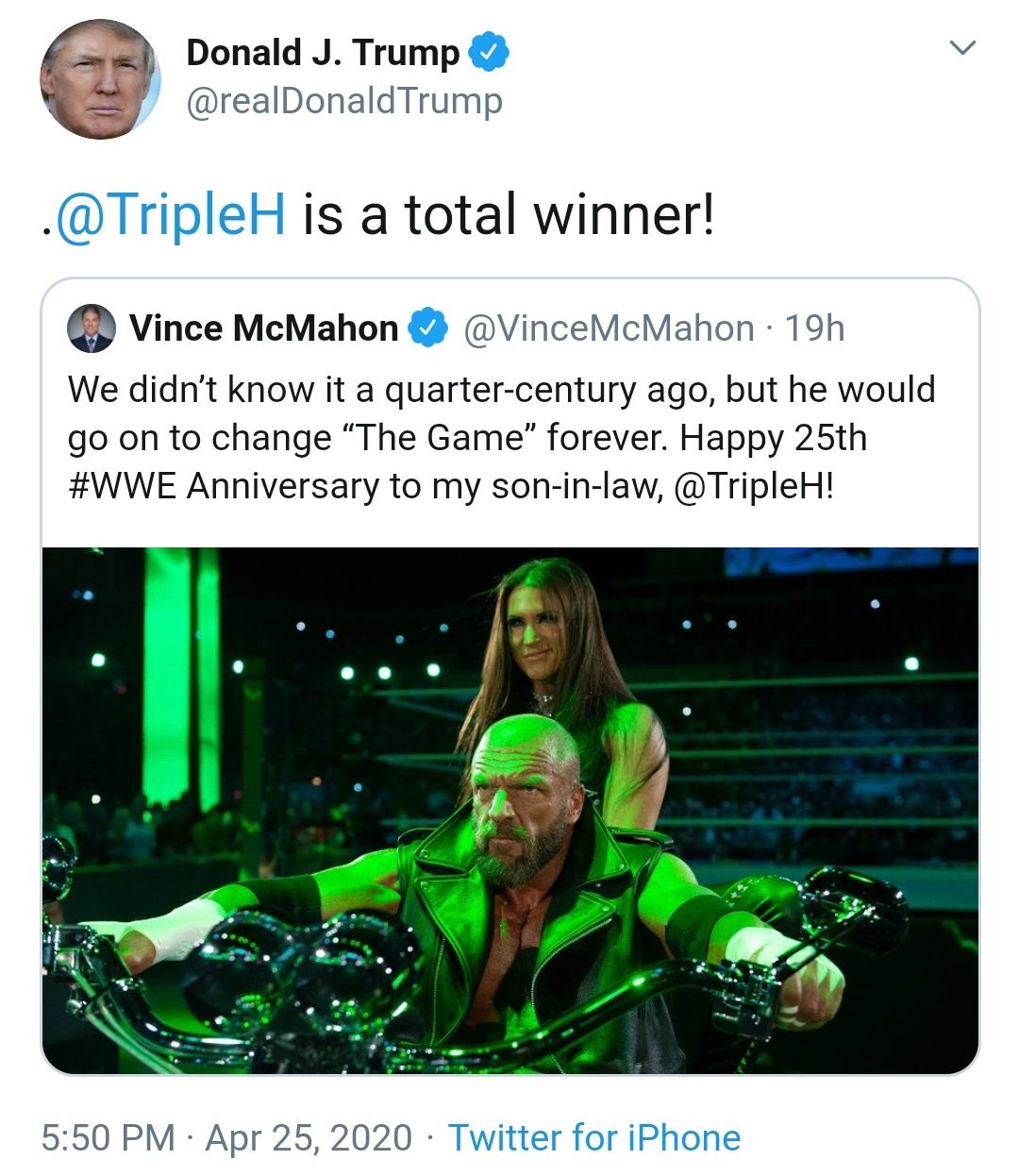 While talking at Corey Graves’ ‘After the Bell’ podcast, WWE executive Triple H revealed that WWE officials almost cancelled the Boneyard match because of its venue. 'Hunter' said that they wanted to do The Boneyard match in a giant piece of land in the middle of nowhere, but because of the coronavirus outbreak, they were not allowed to travel too far. Triple H said the WWE officials and creative team then started looking for a big parcel of land near the WWE Performance Center in Orlando, but they were unsuccessful. Triple H added that they could only find a one-acre lot near a residential neighbourhood, which was not enough to shoot a cinematic wrestling match.

WWE officials then contacted Triple H and revealed to him that they were considering calling WWE Chairman Vince McMahon to ask him to cancel the grand fight and film it in a studio. Triple H, however, somehow convinced the officials and asked them to give it a go. “I was like, Michael (an official), this is it. This is the hand we have, these are the cards we’ve been dealt. We’ve got to figure out how to make this work now,” he said. WWE officials took Triple H’s advice and shot the match in the one-acre lot near WWE Performance Center in Orlando.

READ: WWE SmackDown: What Could WWE Have In Store For Celebration Of 25 Years Of Triple H?

PEOPLE HAVE PLEDGED SO FAR
LATEST NEWS
View all
2 days ago
Aj styles defeats nakamura, proceeds to the next round of ic championship tournament
2 days ago
Mark henry reveals the rock didn’t have a place to live when he joined wwe
2 days ago
When brock lesnar, john cena got into a brawl and the whole locker room came to stop them
2 days ago
Brock lesnar looked like a viking to vince mcmahon when he first saw him: jim ross
10 hours ago
Roman reigns, braun strowman open up on once in a lifetime opportunity with the undertaker