Roposo App Is From Which Country? Details About This TikTok Alternative

Roposo app is from which country? has been the question for many content creators as China-based TikTok gets banned in India. Read more.

As TikTok and 58 other China-based mobile applications get banned in India, fans of the video-sharing platform are reportedly on a lookout to share their content on different platforms because of the ban. During the quest to find various other video sharing platforms, the Roposo app has been evidently gaining some traction around it. Roposo, similar to TikTok, is a platform where people post creative videos. The application also offers a TV-like browsing experience with user-generated content and the Roposo company has deemed itself as 'TV by the people'. But, where does the Roposo application originate from?

Roposo is an Indian video-sharing platform that was initially created back in November 2014. Whereas, the latest version of the application was released on June 10, 2020. The application is available for both iOS and Android devices. Roposo has been created by three IIT Delhi alumni namely Mayank Bhangadia, Avinash Saxena and Kaushal Shubhank. The application was reportedly launched as a fashion social network but was later revamped to feature its current theme. Roposo's headquarters is based in Gurugram, Haryana.

The Roposo video-sharing platform has been acquired by InMobi, which is a global mobile advertising company based out of Bangalore. It is available in several languages like - English, Hindi, Marathi, Gujarati, Bengali, Telugu, Tamil, Kannada, Punjabi and Malayalam. Users can also choose their preferred languages from options like - Hindi, Punjabi, Gujarati, Bengali, Marathi, Kannada, Tamil, Malayalam, Odia, Telugu and Assamese. Roposo's social media takes pride in being based out of India and can often be seen posting about the same. Check it out below - 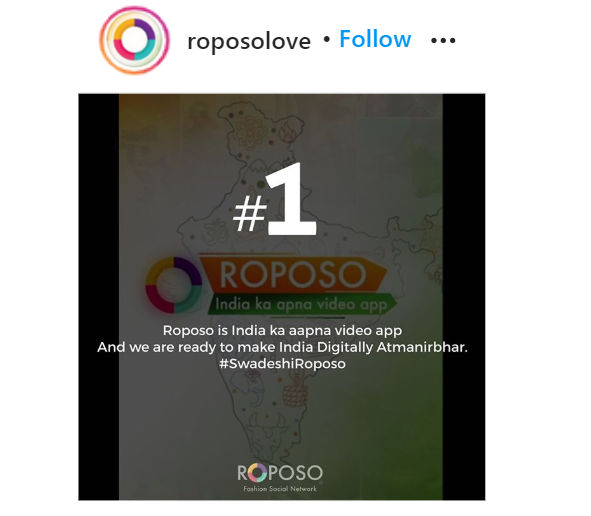 Once signed in, users can select their preferred languages and also browse the application in the same language. Users can simply scroll through a vast video catalogue created by fellow content creators. Users can create their own impressive videos by tapping on the camera icon on the homepage. Roposo currently has over 5 million active users which enable the application to enjoy a dense video catalogue. The Roposo app evidently comes forward as a fitting alternative for TikTok. The application also boasts some different features than TikTok like allowing users to send a gift to the video they like.