Ghost Of Tsushima Update 1.1: What To Expect And When Will The Update Roll Out?

As of now, it revealed that players will be getting the first-ever update of the game titled Update 1.1. It is a free update which makes it better for the fans altogether. Sucker Punch, the developer behind the game had revealed via Twitter that the game's update will be coming up soon. Check it out below -

version 1.1 will begin rolling out Friday October 16 at 8:00AM Pacific Time. We expect it to be available worldwide by 9:00AM Pacific Time. Once version 1.1 is installed, if you speak to Gyozen or select Legends from the menu, you'll be redirected to the PlayStation Store to download a free unlock in order to play online.

Also read: All ghosts in Phasmophobia; Know about all the numerous ghost types 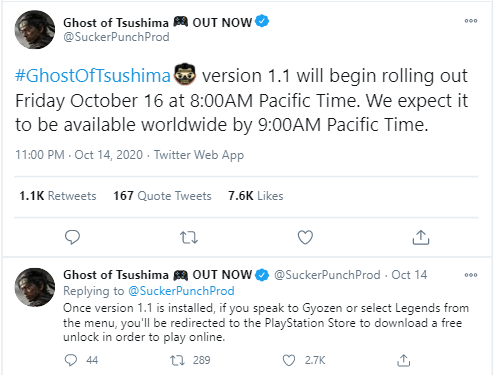 Sucker Punch had recently revealed that the update will begin rolling out on Friday, October 16, 2020, from 8 AM Pacific Time, i.e 8:30 PM IST. Ghost of Tsushima earned worldwide fame and appreciation and also has a number of players from India. The update is expected to go worldwide an hour after it has started rolling out.

Post the installation of the update 1.1, the player can either head to speak to Gyozen or select the option of 'Legends' from the menu in order to access the latest coo-op mode. A free unlock will be needed to be downloaded from the PlayStation Store to be able to play the game online.

The latest update brings about a multiplayer mode in which players can choose between four categories like - Samurai, Ronin, Hunter, and Assassin. The multiplayer mode was explained by the developer in an official blog post. Check out excerpts from it below -

Ghost of Tsushima: Legends is a brand new, online cooperative multiplayer experience that will be a free update for all Ghost of Tsushima owners. A classic element of some of our favorite samurai films is warriors standing together, ready to fight as a team. In Ghost of Tsushima: Legends, you can fight side-by-side with your friends, which is such an important part of fulfilling that samurai fantasy in a whole new way. We’re so excited to hear from everyone who teams up with their friends and jumps in.