Why Does Siri Say 2020 Ends Today? Is Siri Predicting The End Of The World?

Why does Siri say 2020 ends today? is one of the questions on the minds of many netizens. Read below to whether Sir is predicting the world's end.

YouTube personality and social media influencer Keemstar recently posted a photo on Twitter and urged people to ask Siri 'How Long Until 2020 Ends'. This resulted in a series of shocking revelations which put netizens to worry. As the answer given back by Apple's own virtual assistant Siri has reportedly put netizens in a frenzy. Here is what Siri says when asked 'How Long Until 2020 Ends' -

When people asked Siri about when 2020 ends, they got back a shocking answer. While some got an expected answer of the number of days left until 2020 ends, some got spine chilling answers. Siri could be seen returning answers such as 'It is 15 hours until then'.  Check it out below -

Ask Siri “how long until 2020 ends” or something like that it’s freaking me out pic.twitter.com/ZNiOQQjH6Y 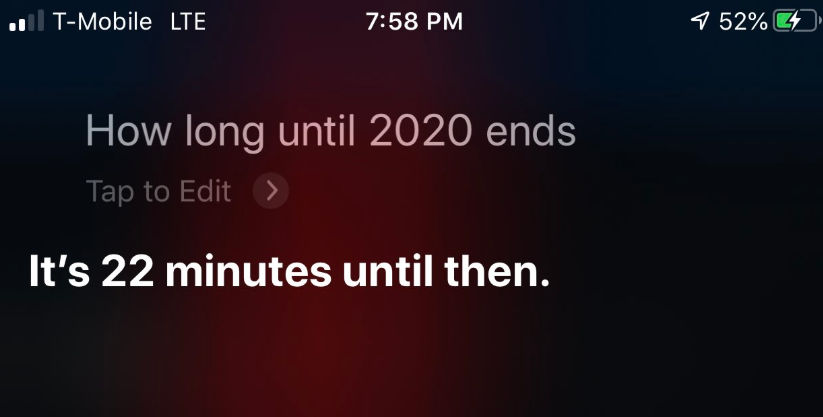 @shanedawson SHANE I NEED ANSWERS. ASK SIRI HOW LONG UNTIL 2020 ENDS. ITS COUNTING DOWN WITH ONLY 2HOURS AND LIKE 50 MIN LEFT pic.twitter.com/Q4flXO5JCH

Many netizens reported this incident on their social media accounts and could be seen getting uncomfortable about the same. But does Siri's answer have anything to do with the world coming to an end? Definitely not. Siri is reportedly designed to follow the 24-hrs format of the clock, which makes 2020 to be 8:20 PM.

The virtual assistant is actually replying to how long before the time 20:20 i.e 8:20 PM ends. Some netizens were quick to point this out and also share how the 24-hrs time format works. Check it out below -

4 anyone freaking out ab the “how long until 2020 ends” involving siri, it’s just military time, look at the chart locate the regular time, and military time. im not 100% sure, but for someone who suffers from severe anxiety, it causes panic attack, it’s good to know but b aware! pic.twitter.com/vyfbZZqh4A