A Russian Astronaut, Sergey Kud-Sverchkov recently shared an Instagram video from ISS which actually shows an Orange Halo around Earth. Read more to find out.

Sergei Kud-Sverchkov, a Russian Astronaut, has shared an interesting video from the space. The video highlights how it may feel like to witness the sunrise as an astronaut. Kud-Sverchkov wrote in the caption that “We will fly over the Pacific Ocean, fly over cities in the United States and Canada, and then meet the sunrise over the North Atlantic. From complete darkness we fly into the part of the orbit that is not yet illuminated by the Sun but is illuminated by the Moon, so even at night you can clearly see the ocean, clouds and night cities."

Also Read | Does Signal have Last Seen ON feature? Can you upload Online Status on the app? 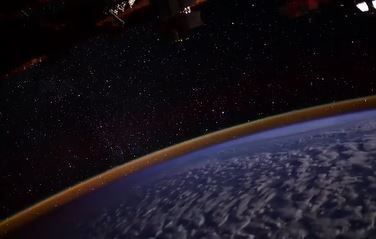 However, in his official Instagram post, the Roscomos astronaut mentioned about the orange halo around Earth. He said that the halo is nothing but the Earth's own glow. In the Instagram video below, you will be able to see the orange halo above the Earth which is practically invisible from the surface, however, but is clearly distinguishable from the ISS. The glow which you can see actually arises from processes in the upper atmosphere.

Roscomos Cosmonaut Sergei Kud-Sverchkov further describes the occurrence by writing: “Approaching the polar latitudes, we observe the appearance of the oval of the northern lights. The bright characteristic green light is recognized by many – it is the glow of atomic oxygen at altitudes of 80–150 km (at a wavelength of 557.7 nm). If you look closely, there is another one above the green halo, dark red – this is the glow of molecular nitrogen, as well as atomic oxygen at altitudes of 150-400 km (at wavelengths of 630 and 636.4 nm) – just almost at the altitude of the ISS flight.” 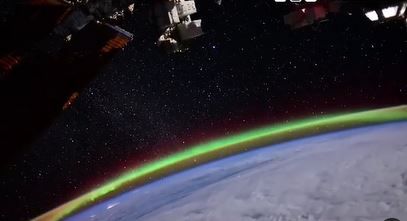 Apart from the orange halo around Earth, you will be able to see a bright blue stripe on the horizon which is the dawn. Also, the flying objects that can be seen on the right side of the video right before dawn are actually satellites that seem completely visible due to the reflection of sunlight.